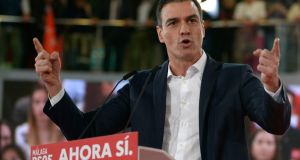 Spain’s acting prime minister Pedro Sánchez has had to apologise after he was accused of meddling in the judiciary as prosecutors attempt to extradite the fugitive former Catalan president.

Carles Puigdemont fled to Belgium in 2017 after overseeing a failed bid for independence by his region. Spanish prosecutors have been trying to extradite him ever since and a new request has been issued to Belgium to hand him over, which is currently being considered.

In a radio interview on Wednesday, Mr Sánchez suggested his government was pressuring the prosecutor’s office to bring Mr Puigdemont back to Spain to face justice. “Who does the state prosecutor depend on?” he asked the interviewer. When the latter replied that it was the government, Mr Sánchez said: “Well, there you go.”

Laura Borrás, of Mr Puigdemont’s Together for Catalonia (JxCat) party, said the prime minister had “certified the death of separation of powers” with his comments, which followed a promise during an electoral debate on Monday to pursue the extradition.

“[He is making] an electoral promise saying he will bring [Puigdemont] back – as if we were in the Wild West and he was the sheriff,” Ms Borrás added. “I don’t know how he would bring him back.”

Spain will hold a general election on Sunday and Mr Sánchez’s Socialists are leading polls.

Although the government can appoint the state prosecutor, it cannot give him or her instructions. Several institutions and organisations made the same point in the wake of Mr Sánchez’s interview.

“The prosecutor’s office does not take orders from the government,” noted Spain’s association of prosecutors, in a statement that reprimanded the prime minister for causing “unacceptable confusion among Spaniards”.

On Thursday, Mr Sánchez apologised for his remarks, attributing them to exhaustion caused by the election campaign and insisted that he does not influence the prosecutor’s office. “There are lots of interviews, lots of hours in front of a microphone, on the screen,” he said. “Sometimes you’re inaccurate.”

Spain’s prosecutors hope that the supreme court’s conviction last month of nine Catalan leaders for sedition will improve the chances of extraditing Mr Puigdemont on the same charge. Spain has also renewed attempts to bring three other Catalan politicians back from abroad to face the justice system: Lluís Puig and Toni Comín, who are in Belgium, and Clara Ponsatí, who is in Scotland.

Meanwhile, Mr Sánchez has called on Catalonia’s president Quim Torra to explain his alleged links to seven pro-independence radicals who were arrested in September on suspicion of preparing a terrorist attack. A statement to police by one of the detainees appeared to implicate Mr Torra in a plan to occupy the Catalan parliament building before declaring an independent Catalan republic.

Mr Torra said the claim had no credibility and called for an investigation into the conditions under which the testimony was made.