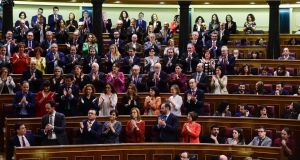 After the EU leaders’ summit in Brussels ended last night, reporters asked Spanish acting prime minister Mariano Rajoy if he intended to contact Pedro Sánchez, the Socialist Party leader with whom he has said he wants to form a governing coalition.

“Whatever I do, I’ll let him know in good time, but tomorrow I’ve got quite a busy schedule,” Rajoy, of the conservative Popular Party (PP), said.

They were hardly the words of a man in a hurry, or one who is leading a country in crisis.

And yet the deadlock that followed Spain’s inconclusive December elections has left it in political limbo for more than 11 weeks, with no solution on the horizon.

An attempt by Sánchez and his Socialists last week to form a new government, by teaming up with the liberal Ciudadanos party, failed as they fell well short of the parliamentary votes needed.

It was the first time since Spain returned to democracy in the late 1970s that a candidate has not managed to secure the simple majority required to become prime minister.

As a result, a May 4th deadline has been triggered. If there is no new government by then, King Felipe will dissolve parliament and call new elections, to be held in late June.

“The disagreements are going to become increasingly evident because we’re embarking on a long pre-election campaign of which [Sánchez ’s] investiture debate was only the first episode,” noted La Vanguardia newspaper’s Rafael Jorba, who believes fresh elections are the most likely outcome.

The fierce tone of last week’s debate highlighted the differences between the four main players. Rajoy dismissed Sánchez ’s attempt to form a government as a “vaudeville show”.

Sánchez , meanwhile, reiterated his own intention never to support Rajoy in forming a government.

And yet, his isolated party still insists it holds the key to a new administration.

“The time will come when the PP will lead these coalition talks, perhaps next week, perhaps in the coming weeks,” José Ramón García-Hernández, a PP member of congress, told The Irish Times shortly before last Friday’s vote.

“There is nothing that can be done without the PP, without our 123 seats. That’s why we insist on having this big coalition.”

While Spain waits for these talks to begin, Podemos claims there is an alternative to both the PP’s mooted grand coalition and the failed Socialist-Ciudadanos pact: it has proposed a leftist front, led by Podemos and the Socialists, with the backing of smaller parties.

But besides the unwieldy nature of such an alliance, it would be complicated by the fact that the relationship between Podemos and the Socialists has deteriorated recently, in great part due to the former’s strident style.

In the most controversial moment of last week’s debate, Podemos leader Pablo Iglesias reminded Congress of the GAL paramilitary group, which killed both Eta terrorists and innocent people during the Socialist government of Felipe González.

However, polls published since December still show no overwhelming beneficiaries from the recent weeks of impasse.

But pressure is now building on Rajoy. His passivity and the torrent of corruption scandals he has failed to stem in his party fuel the notion that he is blocking a solution.

This week, El Español newspaper published a list of figures who, it said, could replace the acting prime minister and ease an emergency governing pact.

Such a move would be unprecedented, but for more than two months Spain has already been in uncharted waters.