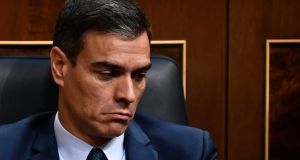 Spain faces continued political uncertainty and the prospect of a fourth general election in four years after Socialist Pedro Sánchez failed to win a parliamentary vote to form a new government.

Mr Sánchez, the acting prime minister, needed a simple majority in the 350-seat congress, but fell well short, only receiving the backing of 123 votes from his own party and one vote from the Cantabrian Regional Party. There were 155 votes against him and 67 abstentions.

His Socialists won an April general election and saw the leftist Podemos party, whose 42 seats would have taken them close to a majority, as their most natural ally. However, the two parties have disagreed over how much involvement Podemos should have in a new government and on Wednesday night the Socialists announced that the negotiations had broken down altogether.

Podemos abstained, as it had done in a first investiture vote on Tuesday, which Mr Sánchez also lost.

“Between the forces of the left the investiture should have been guaranteed from the beginning,” Mr Sánchez said before the final vote, when it was already apparent that he would lose.

“There were never policy problems stopping an agreement,” he added. “The problem was the [distribution of] ministries.”

Initially, Mr Sánchez had announced his intention to lead a minority government and win the support of other parties in confidence-and-supply deals. However, in recent days, the Socialists started to give ground to Podemos, agreeing to discuss its participation in a formal coalition.

But the Socialists’ last offer to its mooted coalition partner before the investiture vote – that Podemos oversee the ministries of health, housing and equality, as well as a social “superministry” – was rejected. According to reports, Podemos instead saw the employment ministry, or at least input into employment policy, as a priority.

Earlier this month, relations between the two parties had deteriorated after Mr Sánchez announced he did not want Podemos leader Pablo Iglesias in his government. Mr Iglesias’s support for Catalan self-determination, the acting prime minister said, made him unsuitable for a front-line cabinet post.

In the parliamentary session before the vote, Mr Iglesias criticised the Socialist leader’s handling of the talks, telling him that “it’s very difficult to negotiate in 48 hours what hasn’t been negotiated in 80 days”.

He also warned Mr Sánchez against leading Spain into a new election. It is possible that King Felipe will invite the Socialist leader to attempt to form a government again after the summer. However, if the deadlock continues until late September, another general election will be called, for November.

Polls suggest the Socialists could make gains in another election although Podemos would be likely to lose ground, meaning a possible overall swing to the right.

Pablo Casado, leader of the conservative Popular Party (PP), which voted against Mr Sánchez, described the Socialist leader’s attempt to form a government as “a bitter power struggle”.

“You haven’t concerned yourself with Spain, ideas or policies,” he said.