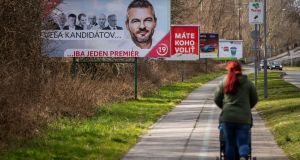 An election poster of Slovakian prime minister and election leader of the Social Democracy (Smer) party Peter Pellegrini: may win by a narrow margin, fuelling speculation it could join forces with followers of ultra-nationalist Marian Kotleba. Photograph: Gabriel Kuchta/Getty

Slovakia stands at a political crossroads ahead of Saturday’s parliamentary election, and its beleaguered Roma minority is being urged to mobilise to help prevent a turn to the extreme right.

Roma activists and politicians are calling on their ethnic kin to break with a tradition of poor turnout and vote in record numbers, and they have persuaded seven of the country’s parties to commit to pursuing anti-discrimination reforms in the new parliament.

Up to 10 per cent of Slovakia’s 5.4 million people are Roma, but many live in penury on the margins of society, making them an easy target for extremists and even for a ruling party that is using nationalist rhetoric in its bid to retain power.

Polls suggest the governing Smer (Direction) party will win the election by only a narrow margin, fuelling speculation that it could join forces with followers of ultra-nationalist Marian Kotleba.

The former schoolteacher, who has praised Slovakia’s wartime Nazi puppet state and marched in black uniform similar to that worn by its troops, came to international attention when he was elected as a regional governor in 2013.

He lost the post four years later but his People’s Party Our Slovakia (LSNS) remains a force, taking 12 per cent in last year’s European elections and now looking to improve on the 8 per cent it won in the 2016 national ballot. Surveys show the party could take more than 10 per cent on Saturday.

“The worst outcome would be Kotleba doing well and somehow going into government with Smer,” says Eugen Radic, mayor of the village of Martinova in central Slovakia.

“Before the elections [Smer] probably won’t talk about it, but once they are trying to form a government they might negotiate,” adds Aladar Bari, mayor of the neighbouring village of Radnovce. “We will only see afterwards if they are willing to work together.”

Both men are from a Roma minority which, particularly in eastern Slovakia, still has poor access to education, housing, the job market and healthcare; some schools are segregated, driving an early wedge between Roma and ethnic Slovaks.

Kotleba has called Roma “parasites” and his party echoes other far-right movements in the region by vowing to “bring order” to mostly Roma districts that they depict as dens of crime and filth.

Slovakia’s supreme court last year rejected a bid to outlaw Kotleba’s party, but he still faces extremism charges for using a 2017 charity event to give poor families cheques for €1,488 – a figure with symbolic significance for neo-Nazis.

Some observers say the LSNS has toned down its aggressive anti-Roma rhetoric recently to boost its electability, focusing instead on perceived threats from the EU and a “liberal elite” that is supposedly out of touch with the “real Slovakia”.

But the threat they pose has not gone away, warns Bari, the Radnovce mayor.

“I’m very afraid that if they gain power there will be far more serious problems in the villages,” he says. “Many Roma say that if Kotleba gets into power they will leave Slovakia.”

Smer has also helped bring anti-Roma prejudice into the political mainstream: when LSNS deputy Milan Mazurek was fined by the supreme court last year for deriding “Gypsy anti-socials” and comparing Roma children to “animals in a zoo”, Smer leader Robert Fico defended him.

“Milan Mazurek said what almost the whole nation thinks and if you execute someone for the truth, you turn him into a national hero,” Fico wrote on Facebook, adding that the police could “enter any pub in Slovakia and lock up all the patrons” for saying similar things.

When prosecutors charged Fico with inciting racial hatred, Smer deputies rallied behind a man who served for 10 years as Slovakia’s prime minister between 2006 and 2018.

“If he’s going to be indicted, then so should we, because we agree with him,” they said. The charges against Fico were dropped last month.

Fico resigned in 2018 after the murder of investigative journalist Jan Kuciak and his girlfriend Martina Kusnirova, which sparked a political crisis that has knocked support for Smer down to about 17 per cent, according to surveys.

Recent polls put the centrist Olano party in second place and the LSNS in third, followed by four liberal and conservative opposition groups which, if they were able to overcome ideological differences, could form a majority coalition government.

One of those groups, the Progressive Slovakia-Together alliance, won Slovakia’s European elections and saw its presidential candidate Zuzana Caputova beat her Smer rival to become head of state last March.

“On the day she became president, she said thank you in all the languages of Slovakia, including the Roma language,” says Viktor Teru, country facilitator for the Roma Education Fund in Slovakia and a personal adviser to Caputova. “This was her first message to society – that she is president for everyone.”

As president, the lawyer and former environmental activist is a strong counterweight to populism and nationalism in Slovak politics, but it is unclear whether a fractious opposition can unite to oust Smer and keep Kotleba at bay.

Smer and the LSNS were not among seven parties that signed a memorandum on Saturday condemning hate speech and pledging to pursue reforms to improve education, healthcare and employment prospects for Roma.

“We want Roma voices to reach the political parties, and for there to be dialogue about the demands coming from the Roma community,” says Csaba Horvath, director of the Opre Roma NGO that led the memorandum initiative.

“We want to mobilise the community because we are afraid of Kotleba’s party and we know that they are mobilising. We want to say that we are here, we oppose extremism and we are part of Slovakia,” he told The Irish Times.

“We see extremist tendencies and negative attitudes towards Roma getting stronger in the region. That’s why this election is so important – to stop Slovakia going in the same direction.”