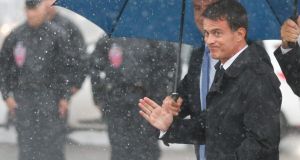 French prime minister Manuel Valls at a migrants’ reception centre in Calais: a visit to “the jungle” was too great a security risk. Photograph: Denis Charlet/EPA

It was all they would see of “the jungle”: black faces lined up along the road as the prime minister’s motorcade sped by, the chaotic jumble of shacks and tents beyond mired in mud from the torrential rain, reflected in lakes of flood water.

It was as if the slums of Port-au-Prince or Bangui had been set down along France’s “Opal Coast”, 11km from the Channel Tunnel. The heavy humid air felt subtropical. Only the concrete German bunkers, relics of the second World War, reminded the visitors they were in Europe.

Monday’s visit by French prime minister Manuel Valls, Frans Timmermans, first vice-president of the European Commission, and other high-ranking officials marked an important step in the slow elaboration of a European policy on the migration crisis.

“There will be no solution without a powerful commitment from the EU and EU member states,” Mr Valls said. More than any other French official, he has embraced German chancellor Angela Merkel’s quest for a humane migration policy.

“To be effective, any response must be collective,” Timmermans said. “There are still reluctant members, but high-level political support in France and Germany gives us new impetus. There will be a European response.”

“I’m not sure what you mean by ‘jungle’. We spoke to women, met children who had stories to tell,” Timmermans said.

“The jungle is where people are shitting behind tents . . .” the journalist interrupted.

The visitors were instead driven to the Jules Ferry Centre, the secure haven at the heart of “the jungle”, which provides migrants with toilets, showers, hot meals and a place to wash clothes, from noon until 8pm daily. The officials arrived before opening hour, but were able to interview four African women in the little clutch of prefabricated buildings that house 83 women and 27 children.

Amid all the talk of humanity, responsibility and solidarity, it was apparent that resolving the migrant crisis will be extremely costly. The EU will contribute €5 million to set up tents to house 1,500 people. They are luxurious compared to the stick and tarpaulin lean-tos in “the jungle” and mark the first time French officials will provide temporary housing for male migrants in Calais.

“You have to be careful what message you’re sending,” Valls said while studying the plans.

The EU earlier gave €3.8 million to help finance the Jules Ferry Centre and has budgeted €266 million over six years for the integration of asylum seekers.

“We cannot, in France, accept that people live in such insalubrious conditions,” he said. Britain is spending €35 million over three years to secure Calais Port and the Eurotunnel, and to help care for migrants.

Natacha Bouchart, the mayor of Calais, said the EU contribution of €5 million was a fifth of what would be required to clean up the jungle. Wearing her tricolour sash in the neo-Renaissance reception room in the town hall, Bouchart told Valls the people of Calais have been generous and long-suffering and expect compensation from Paris.

“The inhabitants of Calais cannot be endless victims of the situation,” Valls said. “I prefer the word ‘solidarity’ to ‘compensation’, but the state will stand by you. We will build your leisure centre . . .”

Stéphane Duval, the director of the Jules Ferry Centre, estimates that 35-40 per cent of Calais’s migrants are from Sudan. As black African Muslims, they are rejected by the Muslim Arab government in Khartoum and equally rejected by the black Christian government in South Sudan. A similar percentage are from Eritrea and Ethiopia, Duval said. Most of the remainder are Afghans, though a large number of Syrians arrived recently.

A poster with pictograms of the Channel Tunnel, railway tracks and a lorry warns: “Beware. Do not add to recent deaths.” At least nine migrants were killed when they tried to jump on to moving trains in July.

French officials refer to the area as “the prairie”, rather than “the jungle”.

“‘The jungle’ sounds a little savage,” Duval said. “But the people who live there aren’t savages. Many are sensitive and intelligent. We have dentists, engineers, university professors . . . People who played an important role in their countries of origin.”

Mr Valls said an “essential distinction” must be made between asylum seekers and illegal immigrants, who must be returned to their country of origin. It was Europe’s responsibility to ensure the right to asylum is respected, “not violated by means of barbed wire. Those who are persecuted in their country, who are exposed to torture, oppressed, must be welcomed.”

French interior minister Bernard Cazeneuve said about 60 per cent of migrants in Italy and in Calais were economic migrants who should be sent home.

That’s not how the aid organisations see it. “All their countries have been affected by war,” says Guillaume Alexandre, director of La Vie Active, the NGO that will oversee the EU-financed tent encampment.

Duval agreed. “We’re humanitarian workers. We’re not going to ask people, ‘Are you here for political or economic reasons?’”