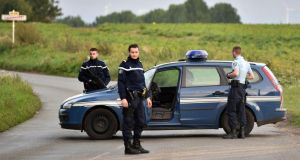 Gendarmes block a road near a Travellers’ camp, the site of a shooting which killed four people and seriously wounded three. Photograph: Philippe Huguen/AFP/Getty Images

A gunman shot dead three members of the same family in a Roma camp in northeastern France on Tuesday before killing a police officer who arrived on the scene, police said.

A six-month-old baby was among the dead, and a three-year-old child was seriously wounded by the suspect before he was shot and injured by police.

One of two police who were fired upon by the attacker died of his injuries.

The shooting is understood to have taken place at 4.30pm in a camp near Roye in Somme, about 68 miles north of Paris.

The circumstances and motive for the killings have yet to be established, police sources said.

According to French newspaper Le Courrier Picard, police and fireman are at the scene and a military helicopter is hovering overhead.