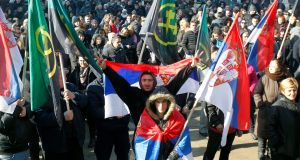 Ethnic Serbs listen to speakers and wave Serbian flags during a protest rally in front of the monument dedicated to emperor Lazar on Sumadija Square in the northern part of Kosovska Mitrovica, Kosovo, January 15th, 2017. Photograph: Djordje Savic/EPA 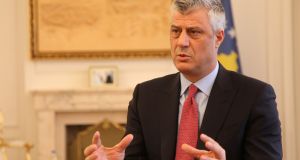 Kosovo special police units on Saturday prevented a train painted in Serbia’s national colours and bearing the words “Kosovo is Serbia” from crossing the border.

Serbia does not recognise the independence of Kosovo, its former province, and did not seek Pristina’s permission for the passage of the train, which it paid for and organised.

Kosovo’s President Hashim Thaci said the train was aimed at “provoking” Kosovars in order to create a pretext for Serbia to intervene militarily and annex northern areas of Kosovo, home to some 50,000 ethnic Serbs who refuse to accept the province’s independence and want to be governed again by Belgrade.

“Serbia’s intention is to use this train, which was donated by Russia, first to help carve away the northern part of Kosovo and then ... attach it to Serbia. It is the Crimea model,” Mr Thaci said in an interview.

He was referring to Ukraine’s Crimea peninsula, home to Russia’s Black Sea fleet and populated mainly by ethnic Russians who, after the collapse of the Soviet Union in 1991, continued to feel loyalty to Moscow rather than to the newly independent government in Kiev.

Serbia lost control of Kosovo when Nato air strikes forced Belgrade to withdraw its troops in 1999 after they had killed 10,000 ethnic Albanian civilians. Nato still has about 5,000 troops stationed in Kosovo to keep the fragile peace.

As well as Serbia, its ally Russia and some other countries also refuse to recognize Kosovo’s 2008 independence.

After talks with Serbia’s military top brass and state security chiefs in Belgrade on Sunday, Serbia’s Mr Nikolic threatened to send troops back into Kosovo.

“If they are killing Serbs, we will send the army, all of us will go, I will go as well, it would not be my first time,” said Mr Nikolic, a former member of the ultra-nationalist Serbian Radical Party who in the 1990s fought alongside Serb paramilitaries in Croatia.

Responding to Mr Nikolic’s remarks, Mr Thaci said any attempt by Serbia to annex northern Kosovo would set off “a chain reaction across the whole Western Balkans”.

Belgrade and Pristina both aspire to join the European Union and normalising relations is a condition of their progress, but Serbia continues to block Kosovo’s membership of international organisations such as the United Nations.

Bilateral relations came under renewed strain this month when former Kosovo prime minister Ramush Haradinaj was arrested in France on a warrant from Serbia, which accuses him of war crimes.