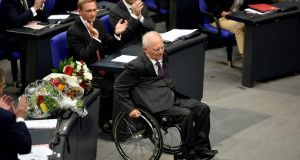 Outgoing finance minister Wolfgang Schäuble goes to take his place after he was elected president of the Bundestag on Tuesday. Photograph: Odd Andersen/AFP/Getty Images

After four years in a grand coalition coma, the Bundestag is back in business.

The curtain lifted on post-war Germany’s 19th parliament on Tuesday with a feisty atmosphere and furious debate. A month after the federal election, with no government in sight, the electric charge came from Bundestag debutantes on the the far-right of the chamber, the Alternative für Deutschland (AfD).

In its first session, outgoing finance minister Wolfgang Schäuble was elected president of the Bundestag – the speaker – with 501 from 705 votes cast, with 173 opposed and 30 abstentions.

The 75-year-old politician, a Bundestag member for 45 years and self-described “passionate parliamentarian”, said political political debate was essential for democracy, once it remained civil and inclusive.

With an eye on the AfD, whom he has dubbed a “disgrace for democracy”, Schäuble warned MPs not to denounce democratic decisions as “illegitimate, treacherous or whatever”.

“In the last months in this country there has been a tone of contempt and humiliation, I find this has no place in a civilised co-operation,” he said. “We shouldn’t beat each other up here, but argue without it getting ugly.”

In a nod to the AfD and its far-right affiliates outside parliament, such as the anti-Islam group Pegida, he added: “No one represents the people alone, the will of the people arises through our parliamentary decisions.”

As a record 709 MPs – 110 more than usual – squeezed into the parliamentary chamber, the AfD moved quickly to attract attention to itself.

With a Holocaust survivor, Inge Deutschkron, watching from the gallery, the AfD parliamentary secretary Bernd Baumann drew parallels between attempts to exclude his party from parliamentary business and Nazi tactics against political enemies.

Baumann attacked a rule change two weeks before the end of the last parliament, to ensure that the oldest-serving MP would open the next Bundestag. The previous, long-standing practice – allowing the oldest MP speak first – would, the other parties feared, have allowed AfD dominate proceedings.

The last time this “elder president” tradition – dating back to 1848 – had been disregarded, he said, was in 1933 when Hermann Göring “wanted to sideline political opponents”.

“Do you want to head down such a crooked path?” he asked, to audible gasps. Later he defended his remarks, insisting: “We are not trying to compare ourselves to the victims of National Socialism.”

But an equally pressing challenge will be how to counter the challenge posed by the first far-right party in parliament since 1953. Leading German historians have warned against attempts – most recently by ex-foreign minister Joschka Fischer – to dismiss the AfD as “Nazis”.

“That’s dangerous because, with that, you also berate the voters, 60 per cent of whom backed the AfD out of support, not conviction,” wrote Prof Heinrich August Winkler in the Bild tabloid.

In the afternoon, in three rounds of voting, about 80 per cent of members voted against accepting as a parliamentary deputy speaker the AfD’s proposed candidate. The 75-year-old Albrecht Glaser has attracted criticism for calling Islam a political ideology rather than a religion, and saying that Muslims should not have the right to freedom of religion as Islam did not respect that freedom.

Andrea Nahles, parliamentary leader of the Social Democrats (SPD), and the rising force in the centre-left party, said her party could not support the AfD candidate. Looking ahead to four years in the crowded Bundestag, she added: “The fact that things are going to be more lively could be a good thing.”

Amid all the congratulations for Schäuble, the departing foreign minister Sigmar Gabriel, former Social Democratic Party (SPD) leader, couldn’t resist a dig. “In Europe Schäuble succeeded in upsetting almost all EU member states,” said Gabriel in an interview. “Germany is viewed as a head teacher that always wants to give austerity instructions.”

As the Bundestag curtain descends until a new government is elected, Berlin political veterans were optimistic after the stultifying grand coalition era just past. “I heard more music in there today than in the last four years,” said Mr Ulrich Deppendorf, political commentator for ARD public television.