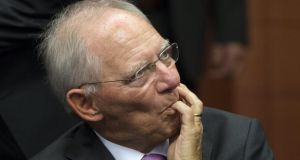 German finance minister Wolfgang Schäuble - looking like he’d aged a decade in a week - summed up the latest twist in the Greek crisis on the evening news in one word: depressing.

Is there any chance of preventing a Greek default on Tuesday, he was asked, and its exit from the euro?

“I don’t think so,” said Dr Schäuble, slits of eyes closing with fatigue on the ZDF public television news. “It was incredibly ambitious as it was ... and that anything should happen now is really ruled out, but Tsipras knew that yesterday.”

The German minister said it was “perplexing and depressing” that the Greek prime minister had announced on television the referendum on the proposed reform package with its creditors, saying it was the opposite of the signals he had given chancellor Angela Merkel and other EU leaders in Brussels hours earlier.

Last month Dr Schäuble appeared to favour the idea of a referendum, saying that it “perhaps that would be a correct measure to let the Greek people decide”.

A spokesman for the German leader confirmed that she had telephoned with Mr Tsipras late on Friday night but declined to comment on the contents of the phone call.

Dr Schäuble said he “didn’t know exactly” what would happen in the coming days, but predicted it would happen quicker than many expected. In a nod to the run on ATMs in Greece, the German finance minister said the drama was likely to reach its peak sooner than the repayment deadline of the €1.6 billion IMF loan on Tuesday.

In keeping with the hard line agreed at Saturday’s eurogroup meeting in Brussels - without the Greek minister - Dr Schäuble ruled out any Bundestag vote to bridge the gap between Tuesday’s IMF deadline and the Greek referendum.

Without a vote from the German parliament - and five other parliaments in Europe - the second Greek programme expires at the end of the month. Under the current circumstances, he said, it was not possible to expose his taxpayers to further risk.

“We would have to say to our population and parliament that government would do what it is obliged to do in programme although it just recommended people not to accept it,” he said.

Refusing such a vote is a matter of political survival for the Christian Democratic Union-lead coalition in Berlin, with opposition growing in its own ranks to further assistance for Greece. A successful Bundestag vote for an extension of the second programme or even a third programme is seen as increasingly unlikely.

Already Berlin is calculating the cost of writing off its billion contribution to EU Greek loans. While the usual figure quoted is around €70 billion, Günther Krichbaum, head of the European committee of the Bundestag put the figure at closer to €80 billion.

Dr Schäuble played down the final cost to the German taxpayer.

“We have experience of how to deal with such debt crises when they occur,” he said. The loans to Greece, via the EFSF fund, were “so long-term financed with low-interest rates guaranteed by other member states in a period of decade and in this period the debts will be restructured, not unusual procedure”.

However, the French prime minister Manuel Valls has taken a different view, and he has urged the the Greek government to come back to the negotiating table, warning that the country’s membership of the euro was at stake.

While other euro zone policymakers have taken a more hard-line stance, Mr Valls said talks could still resume. “A deal is still possible, I invite the Greek government to come back to the negotiation table,” Mr Valls told French television stations on Sunday. “I cannot resign myself to Greece leaving the euro zone ... We must find a solution.”

While other euro zone policymakers have taken a more hard-line stance, Mr Valls said talks could still resume. “A deal is still possible, I invite the Greek government to come back to the negotiation table,” Mr Valls told French television stations on Sunday. “I cannot resign myself to Greece leaving the euro zone ... We must find a solution.”

Since news of the referendum broke on Saturday German politicians have sent mixed signals on the latest twist in the standoff with Athens. Leading the way in sending mixed signals is the Social Democrats (SPD), junior partner in Berlin’s grand coalition.

Early on Saturday, SPD leader Sigmar Gabriel welcomed the referendum as a chance to settle the crisis once and for all. But in the “Welt am Sonntag” newspaper, SPD foreign minister Frank-Walter Steinmeier said he was “speechless” by the “zig-zag course of the Greek government”.

He condemned the Athens government for urging its people to reject the EU/IMF reform proposals, saying it was taking its people “hostage” to “wring further discussions from Europe”.

After the SPD steering committee held a telephone conference on Sunday morning, a participant described the atmosphere among leading party officials as “general outrage”.

Meanwhile Austrian finance minister Hans Jörg Schelling told “Die Presse” daily that, since last Thursday, Greece’s path towards a default was clear. But he pointed out that not servicing its IMF loans would not automatically mean its exit from the euro.

“One can’t leave the currency union, one can leave the European Union, ” he said. “For that Greece has to file an application, the other countries have to ratify the exit application. Only then, most likely, can Greece leave the euro zone.”

Germany’s media reacted on Sunday with a mixture of outrage and sardonic wit to the Greek referendum proposal.

“Tsipras, that’s enough!” headlined Bild am Sonntag tabloid, a strident Greek-critical voice in the media landscape. “Under the burden of home-made crises, the basis of Europe is crumbling: its solidarity.”

The Cicero political magazine ran an online cartoon of Chancellor Angela Merkel holding up a two-sided sign. On one side, “I’m against a Grexit...” -- on the other “...as long as it could look that *I’m* responsible for it.”

Back on German television, Wolfgang Schäuble insisted that a possible Grexit would make the remaining members of the currency union “even more determined” to ensure the euro “will not be a fluid” construct, under pressure from finance markets.

Then, apparently reconsidering his earlier remarks about Athens, he appeared to suggest that the game was not quite yet over.

“It depends on the Greeks,” he said, “but with the confusing politics from Mr Tsipras it’s become a lot more difficult.”