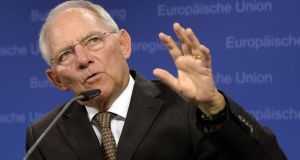 German finance minister Wolfgang Schäuble has proposed pruning and reordering the competences of the European Commission in light of its euro crisis role and its ambition to become a “European government”.

Two weeks ago Dr Schäuble suggested to euro area finance ministers that the growing political activity of commission president Jean-Claude Juncker in the standoff with Greece brought the Brussels executive into conflict with its original role as guardian of the treaties and overseer of the single market.

According to the Frankfurter Allgemeine daily, Dr Schäuble raised this issue at the same Brussels meeting at which he suggested offering Greece a “timeout” from the eurozone to restructure its debt.

Attendees at the meeting said the Dutch finance minister Jeroen Dijsselbloem indicated he would put the German proposal onto the agenda of the Dutch presidency of the European Council in the first half of 2016.

The proposal could also form part of a wider EU reform debate being demanded by London ahead of its vote on EU membership. It comes, too, as French president Francois Hollande has revived talk of a further integration push to a European “political union” with greater powers to oversee the currency union.

At issue in the Schäuble proposals is whether some key commission competences, such as oversight over competition law and the internal market, should be transferred out of the EU executive into a new, independent authority similar to Germany’s federal cartel commission.

The proposal is the latest contribution to a debate on a new integration push and, according to German officials, is Berlin’s response to European Commission president Jean-Claude Juncker’s ambition when he took up office last year to run a more “political commission”.

Since the return of the Greek crisis, Berlin has been annoyed by Mr Juncker’s increased involvement in the talks, in particular negotiating with Greek prime minister Alexis Tsipras. Berlin officials blame the commission president for egging on Mr Tsipras to push for a “political” deal for new loans and a debt write-down, leading to the incomplete second EU/IMF programme.

Dr Schäuble has complained that he sees Mr Juncker’s involvement with Athens as infringing on the competence of the euro group, where euro area finance ministers meet. Another such political intervention, German officials say, was the so-called “Juncker Fund” for investment in the euro area.

Looking to the future, beyond the current eurozone crises, Berlin officials argue that the commission cannot cling to its role as guardian of the treaties and the internal market while simultaneously becoming a political body.

Becoming more of a “European government”, an idea Dr Schäuble has always supported in the past, would, Berlin officials suggest, require the Brussels executive body to sacrifice competences it has held since its foundation.

Officials close to Mr Juncker dismissed the proposal in the Frankfurter Allgemeine (FAZ) as a “very German” view of things. In its view, the commission’s role is not just to ensure adherence to competition rules and to protect the internal market but also to push common European interests. There was no conflict of interest, the official told the newspaper, because Mr Juncker didn’t exert any influence on his officials, such as the powerful competition commissioner, Margrethe Vestager.

A week ago Dr Schäuble backed the French revival of a “political union”. In this week’s Der Spiegel the minister’s officials went further, expressing a readiness to divert some of Germany’s national sales and income tax takings to bankroll a new “euro budget”.