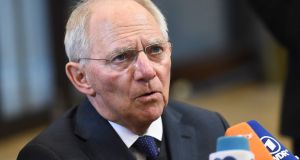 German finance minister Wolfgang Schauble: “Who can, should act, and later we will negotiate distribution. We cannot wait longer for results in Brussels.” File photograph: Emmanuel Dunand/AFP/Getty Images

German finance minister Wolfgang Schäuble has called for a European “coalition of the willing” to tackle the continent’s migration crisis – rather than wait for EU members states to agree on a burden-sharing agreement.

A day after Austria capped asylum applications, to cheers in neighbouring Bavaria, irritated Berlin officials expressed doubt that the measure would work.

“It’s not been made sufficiently clear to me how this will be implemented in practice,” said foreign minister Frank Walter Steinmeier. Chancellor Angela Merkel reportedly described the measure as “not helpful”.

Rather than wait for other EU member states to follow Austria’s example, Mr Schäuble called for a European avant-garde to move forward.

“Who can, should act, and later we will negotiate distribution. We cannot wait longer for results in Brussels,” said Dr Schäuble at the World Economic Forum in Davos. “Falling backwards into a Europe with national border checks is the worse solution, and we are working for the better one.”

Beyond its asylum cap, Austria has stepped up its border controls on its southern border with Slovenia. An additional 500 soldiers have been deployed at Spielfield, a border crossing in the Styria region, to process up to 6,000 people crossing the border daily.

A 3.7km mesh fence has been erected on either side of the crossing there. The first barrier of its kind inside the EU’s passport-free Schengen zone will go into effect on Friday.

From 10.30am, only people intending to file for asylum in Germany will be allowed pass this key border crossing on the Balkan route. Those en route to Scandinavia will be refused entry. Everyone who crosses will be registered with photo and fingerprint and their personal details checked.

Austria’s announcement of an asylum cap – intended by Vienna as a wake-up call to force greater EU burden-sharing – has had a domino effect across the region.

While Berlin considers doing more in the migration crisis, Dr Merkel’s Bavarian allies have reached the end of their tether.

After a bad-tempered meeting on Wednesday, Bavarian state premier Horst Seehofer attacked the chancellor for making “serious mistakes” on migration and for showing “not one sign of compromise” on measures to cap inward migration that topped 1.1 million last year.

“We have difficult weeks and months ahead,” he warned.

Amid growing pressure among her own backbenchers, Dr Merkel hosts the Turkish cabinet for talks on Friday on how to reduce refugee flows to the EU.