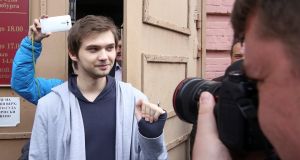 A Russian court on Thursday gave a suspended 3½-year jail sentence to a blogger who was detained after he played the video game Pokémon Go inside a Russian Orthodox church last year.

Ruslan Sokolovsky was found guilty of inciting religious hatred after posting a video on YouTube where he is seen playing Pokémon Go on his smartphone in the church.

In the video, which contains strong language mocking Christianity, Sokolovsky likens Jesus Christ to a Pokémon character and says he had decided to play the popular game inside the church because he had seen a news report saying people who did so could be fined or jailed.

The video garnered more than 1.9 million views, and Sokolovsky was temporarily confined to a pretrial detention centre.

The court in the Urals region city of Yekaterinburg also sentenced the 22-year-old to 160 hours of compulsory community service and told him not to show up in public places.

“I’m content. I won’t play Pokémon, it’s already out of fashion,” Sokolovsky said after the sentencing.

His lawyer said Sokolovsky was unlikely to appeal Thursday’s verdict.

Inciting religious hatred was the same charge used to prosecute the Pussy Riot punk band in 2012 after they staged a cathedral protest against Russian president Vladimir Putin. Two of the band were given two-year jail sentences.

Kremlin spokesman Dmitry Peskov declined to comment on Thursday when asked by reporters about the court’s decision.

Sokolovsky was met by a group of young people who clapped as he left the Yekaterinburg courtroom, including one dressed as a Pokémon character.

A blogger in the crowd, Danila Poperechny, told Reuters he was happy that Sokolovsky had escaped prison time but that he was disappointed that the case had been framed in terms of offending believers’ feelings.

Poperechny said: “The guy spent a lot of time in a temporary detention facility literally for thinking differently.”

1 Tony Holohan stepping back from role as chief medical officer
2 Several factors pushing Boris Johnson towards a Brexit deal with Brussels
3 Coronavirus: Rise in transmission in Ireland sparks concern
4 A ‘rock’ and a ‘patriot’: Tributes paid to Tony Holohan as he steps back
5 Bobby Storey: The IRA's planner and enforcer who stayed in the shadows
Real news has value SUBSCRIBE