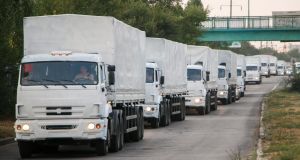 The Russian aid convoy in the city of Voronezh, about 530km from Moscow yesterday. The Ukrainian government fears the Russians could be supplying arms to separatists, under the guise of supplying 2,000 tons of food and medicine to civilians in rebel-held areas. Photograph: EPA

Ukraine has warned that Russia could use a controversial aid delivery as a pretext for invasion, amid growing tension and uncertainty over the fate of a convoy of almost 300 military trucks dispatched by Moscow.

The trucks were believed to be parked last night at an air force base in the Russian city of Voronezh, while Kiev, Moscow, western capitals and international organisations ranging from Nato to the Red Cross weighed in on what should happen next.

Russia says the lorries contain only food, water, medical supplies and electricity generators that are urgently needed in Ukraine’s eastern Luhansk and Donetsk regions, where more than 2,000 people have died and hundreds of thousands been displaced in fighting between pro-Moscow rebels and government forces.

Ukraine and its western allies fear deception on the part of Russia, which they accuse of funnelling fighters and weapons to rebels whom they believe shot down a Malaysian airliner last month, killing all 298 people on board.

Russian foreign minister Sergei Lavrov claimed on Tuesday evening that Kiev had agreed to allow the convoy of 287 military trucks – hastily painted white – to enter Ukraine with local number plates and representatives of the government, the Red Cross and the Organisation for Security and Co-operation in Europe (OSCE) on board if requested.

“First they provided tanks, Grad missiles, terrorists and bandits who shot at Ukrainians, and then they provide water and salt … Russian cynicism knows no bounds,” said prime minister Arseniy Yatsenyuk.

“Ukraine can only accept humanitarian aid within the framework of international law and only from the Red Cross,” he explained, before adding: “It would have been better for the Russians to send those 300 trucks empty and take back their bandits – then there’d be no need for humanitarian aid.”

Other officials said emphatically that the trucks would not enter Ukraine as planned through government-controlled Kharkiv region, prompting suggestions that the convoy could cross further east, where rebels control stretches of the border; Izvarino, in Luhansk province, is one potential entry point.

The Red Cross said it needed clear security guarantees and more information about the contents of the trucks and the route they were taking.

Russia is determined to deliver the aid, and its foreign ministry rejected as “absurd” suggestions “that the humanitarian convoy to help the civilian population of southeast Ukraine could be used as a pretext for Russian ‘military intervention’.”

Moscow’s open hostility to Kiev’s new pro-western leaders and support for rebels in the east have destroyed millions of Ukrainians’ trust in Russia, however.

They fear the military convoy may contain weapons for the rebels, or could come under an attack – staged or otherwise – which would provide Russian president Vladimir Putin with a pretext to flood Ukraine with “peacekeeping” forces.

Svyatoslav Tsegolko, a spokesman for Ukrainian president Petro Poroshenko, said yesterday that Ukraine’s leaders had decided to accept the aid “to avoid a full-scale invasion from Russia”.

He said he saw three ways the stand-off over the convoy could develop.

“The first scenario is invasion of Ukrainian territory on the pretext of delivering humanitarian aid; the second is a provocation with the cargo in Kharkiv region, with a high probability of aggression from the Russian side.”

“The third scenario is that aid for Luhansk passes through the border crossing nearest the city. Our customs and border guards, with OSCE representatives, check the cargo on the border. Then it moves through territory controlled by the militants, and when it reaches Luhansk the aid will be distributed by the Red Cross.”