Russia set to profit from votes in Bulgaria and Moldova 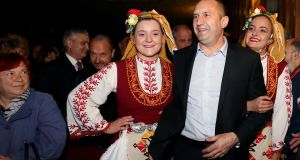 Politicians seeking closer ties with Russia are expected to win Sunday’s presidential election run-offs in Bulgaria and Moldova, potentially giving another boost to the Kremlin after its favoured candidate won the race for the White House.

Donald Trump’s victory was welcomed in Russia and may give momentum to Moscow-friendly contenders Rumen Radev in Bulgaria and Igor Dodon in Moldova, in their election deciders against rivals who are more wary of the Kremlin.

General Radev, a former air force commander and candidate of the opposition Socialists, won the first round against Tsetska Tsacheva, a member of Bulgaria’s ruling, centre-right Gerb party.

If Gen Radev were to win on Sunday as polls suggest, it would deal a heavy blow to prime minister Boiko Borisov’s government, and could lead to his resignation and snap parliamentary elections in the EU and Nato member state.

Gen Radev has profited from widespread disappointment with the government and its failure to crush corruption, fears over the impact of the refugee crisis on Bulgaria, and a sense that the West is being outmanoeuvred by Russia.

Bulgaria shares an Orthodox faith, Cyrillic alphabet and centuries of history with Russia, and it was seen as one of the Kremlin’s loyalist vassals in the Soviet era.

His call for pragmatism and the improvement of business ties with Russia resonated in Bulgaria, the poorest member of the EU, and a place where Moscow still exerts great economic influence, particular through energy supplies.

While not strongly critical of Russia, Ms Tsacheva insists that Bulgaria must prioritise solidarity with EU partners over a rapprochement with Russian president Vladimir Putin.

Before the first round of the election last Sunday, outgoing Bulgarian president Rosen Plevneliev accused Mr Putin of seeking to weaken and divide Europe, and he said Russia was suspected of launching cyber attacks against Bulgaria.

To the northeast in Moldova, the poorest country in the whole of Europe, pro-Russian populist Igor Dodon is confident of repeating his first round win over Maia Sandu, a pro-EU former World Bank economist and anti-corruption candidate.

Ms Sandu says she is determined to clean up her graft-riddled country of 3.5 million people, where in 2014 the banking system was hit by the still unsolved disappearance of $1 billion.

She is calling for a massive election-day turnout of people who see their future not with Russia but Europe, a rallying cry that many Moldovans greet with scepticism due to the graft and incompetence of several supposedly “pro-western” governments.

Mr Dodon says he will seek good ties with both the EU and Russia, but wants the latter to be Moldova’s main strategic partner and plans to make Moscow his first destination as president.

In Moldova’s 2014 parliamentary elections, he appeared on posters with Mr Putin above the slogan: “Together with Russia!” – (Reuters)