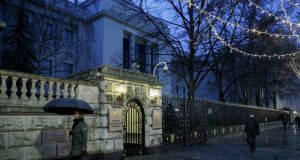 Russian embassy in Berlin: tensions mount as Moscow refuses to co-operate in the investigation of a murder in which German prosecutors suspect Russian or Chechen involvement. Photograph: Carsten Koall/GettY

Russia on Thursday expelled two German diplomats in what it called a standard diplomatic response to a similar move by Germany last week and said it hoped a dispute over the killing of a Georgian citizen in Berlin would not damage ties further.

Berlin announced the expulsion of two Russian diplomats last week over what it said was Moscow’s refusal to co-operate in the investigation of a murder in which German prosecutors suspect Russian or Chechen involvement. The Russian government has denied any connection with the killing.

Russia’s foreign ministry on Thursday summoned the German ambassador in Moscow to issue Berlin a formal protest over the expulsions and gave two German diplomats seven days to leave the country, it said in a statement.

“These measures were unavoidable after two of our diplomats were expelled. We consider the move by Berlin to be absolutely unfounded,” Kremlin spokesman Dmitry Peskov said.

“We expect and hope that this will not become a negative factor for the further development and broadening of our constructive dialogue,” he told reporters on a conference call.

Tensions between Russia and western countries including Germany, which is heavily reliant on Russian gas and oil, have resurged since the poisoning last year of a former Russian spy, Sergei Skripal, and his daughter on British soil.

Germany traditionally has close business ties with Russia and the diplomatic row comes as Russia is building a major natural gas pipeline to Germany, Nord Stream 2, despite US opposition.

Germany’s foreign ministry said it regretted the move by Russia to expel the German diplomats. “It sends the wrong signal and is unjustified,” it said.

Georgian citizen Zelimkhan Khangoshvili was shot dead in Berlin in August as he was heading to a mosque.

Russian president Vladimir Putin said this week Khangoshvili himself was a killer who had carried out bloody acts on Russian soil and that Moscow’s requests for his extradition had not been heeded.

Germany contradicted that on Wednesday, saying it was not aware of any extradition requests made by Moscow.

On Thursday, the Kremlin insisted it had sought Khangoshvili’s extradition. Foreign ministry spokeswoman Maria Zakharova said Khangoshvili had been sought by the police and was listed in Russia’s official database for wanted criminals.

“There were requests. The man took part in acts of terrorism and mass murder,” Peskov said. – Reuters