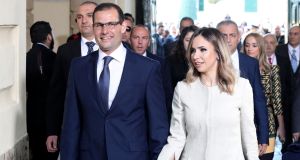 Lawyer Robert Abela (42) was sworn in as Malta’s prime minister on Monday, succeeding Joseph Muscat who resigned over his handling of investigations into the murder of anti-corruption journalist Daphne Caruana Galizia.

Mr Abela was elected leader of the ruling Labour Party in a vote among the party members on Saturday. The son of a former Maltese president, he was first elected to parliament in 2017 and has little political experience.

Hundreds of supporters lined Valletta’s Republic Street to greet the new prime minister who waved to the crowd from a balcony in the presidential palace after the swearing-in ceremony.

Mr Abela has vowed to put more focus on social issues, particularly living standards and pensions, and has proposed offering free medicine for pensioners. He has also promised to strengthen the rule of law and boost good governance – issues for which Mr Muscat was repeatedly criticised.

Mr Muscat announced his resignation last month over accusations of having protected his chief of staff Keith Schembri and others linked to Yorgen Fenech, a prominent businessman who has been accused of being an accomplice in Ms Caruana Galizia’s murder.

Mr Fenech has pleaded not guilty to complicity in the 2017 murder. Mr Schembri resigned in late November but has denied any wrongdoing.

Mr Abela has made no announcement of any cabinet reshuffle and has promised continuity.

Sven Giegold, a German member of the European Parliament for the Green party, who was a constant critic of Mr Muscat’s rule, said Mr Abela faced a difficult challenge.

“Abela deserves a chance, but scepticism is appropriate,” Mr Giegold said in an emailed statement, adding that Mr Abela had been a one-time legal adviser to Mr Muscat.

“Malta must finally comply with European rules when it comes to anti-money laundering, the independence of the judiciary and banking supervision,” he added, referring to issues that have been scrutinised by both the EU Commission and EU parliament. – Reuters