Riots in small Dutch town over building of refugee centre 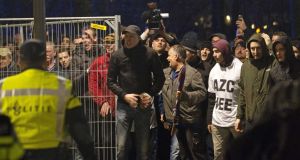 Police officers face protesters outside a council meeting in Geldermalsen, the Netherlands, on Wednesday night over plans to open a centre for 1,500 refugees. Photograph: Jeroen Jumelet/EPA

Armed police fired warnings shots and fought running battles with hundreds of protesters who staged riots in the centre of a small Dutch town on Wednesday night, demanding the abandonment of plans to build accommodation for 1,500 asylum seekers from Iraq and Syria.

Hours before EU leaders gathered in Brussels for an end-of-year summit due to focus on the migrant crisis, local police were forced to surround the town hall in Geldermalsen, some 70km southeast of Amsterdam, to protect local councillors gathering to discuss the project.

As the meeting got under way, the police came under fire with bricks, bottles, and fireworks and groups of men chanting anti-immigrant slogans began to break through the makeshift barriers surrounding the hall, forcing the cancellation of the meeting.

At one point the national broadcaster, NOS, estimated the number of protesters at about 2,000, and at that point the authorities called in 14 minivans of specially trained riot police who began to force the rioters back so that the hall could be evacuated.

As the meeting broke up, local mayor Miranda de Vries tweeted that everyone who’d been inside was safe, adding, “People say they are frightened of asylum seekers. Well, I am very, very, saddened by what has happened here.”

At the height of the disturbances, explosives experts were called in to deal with what turned out to be a cache of fireworks.

Two police officers were injured during the rioting, and a spokesman said there had been 14 arrests.

Who was behind the violence was not clear. Some local people claimed the rioters had come “from outside”. Others said it was an expression of “local anger”.

One local councillor told police he’d received a phone call at home warning he’d be killed if he voted in favour of the asylum centre.

The rioting in Geldermalsen – population 27,000 – was the worst display of anti-migrant anger since an attack on a Syrian refugee centre in October, though there have been many angry protests at council meetings around the country.

Deputy justice minister Klaas Dijkhoff described the rioting as “un-Dutch”, adding: “This is not how we deal with each other in the Netherlands. This is unheard of.”

On Tuesday, anti-immigrant politician Geert Wilders was named Politician of the Year by the TV current affairs programme EenVandaag – which said he was the only politician who had listened to the real concerns of the public about asylum seekers.