Riot police in Brussels use water cannons on demonstrators 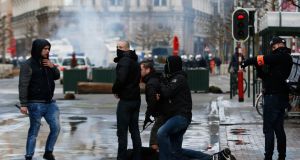 A right wing demonstrator is detained by police following a protest at the site of one of the memorials to the victims of the recent Brussels attacks. Photograph: AP

Belgian riot police have used water cannons on a far-right protest group which disrupted the large remembrance gathering at the central Place de la Bourse in Brussels on Sunday.

As members of the public laid floral tributes to the victims of Tuesday’s attacks at a makeshift memorial, police clashed with the demonstration group, which was seen making Nazi salutes and confronting ethnic minority groups, according to the BBC.

After riot police failed to force the group back from the vigil, water cannons were used to disperse individuals to cheers by members of the crowd that had come to pay their respects.

Adrian Liston, who was present at the vigil, told the BBC that the memorial had been disrupted by a “bunch of skinheads” who had turned up “in force”.

“They marched into the square and started a major confrontation with the peace protesters,” he added.

A public demonstrationdue to take place on Sunday in defiance of this week’s attacks had been called off over security concerns.