Pressure on Catalans and Spain government to end standoff

Alarm at lack of political discussion between sides on Catalan question 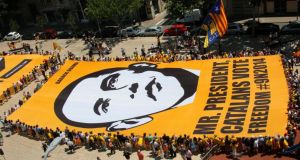 Demonstrators with the pro-independence Catalan National Assembly hold a giant banner with an image of US president Barack Obama at Plana square in Badalona, near Barcelona. Photograph: Gustau Nacarino/Reuters

With a contentious Catalan referendum on independence from Spain slated to take place in less than four months, pressure is building on the region’s nationalists and the central government to end their political standoff and reach a negotiated solution.

The Catalan regional government of Artur Mas, backed by pro-independence parties, has set a November 9th date for the vote. The central government of Mariano Rajoy argues it would violate the constitution, a view Spain’s congress and justice system have backed.

With both sides having been on a political collision course on the issue since Mas announced, nearly two years ago, his intention to stage the referendum, many observers are alarmed at the lack of political communication between the northeastern region and Madrid.

In a recent editorial, titled “Talk, once and for all!”, the newspaper El País admonished both sides. “Mas and Rajoy are old enough and responsible enough not to avoid their commitments with ambiguous games or a prolonged dialogue of the deaf,” it said.

That sentiment has been echoed by many commentators and politicians, including former Socialist minister Joan Majó, who described the situation as one of “paralysis and confusion”.

These opinions finally seem to have had the desired effect, with Mas and Rajoy expected to meet shortly to discuss the independence referendum, which will in theory be non-binding. Hopes that the two might find some common ground were briefly raised last week when the Catalan leader said he was prepared to negotiate the date and wording of the referendum with Rajoy.

However, the prime minister, whose Popular Party (PP) is keenly anti-secessionist, has made clear that he has no intention of giving ground.

“I’m not going to get into absurd debates,” Rajoy said last week. “That referendum is illegal and therefore it will not be held. I think it’s best to say things clearly so people don’t build up false expectations.”

The divisive nature of the issue has been further emphasised by the unveiling of two conflicting manifestos this week.

On Tuesday of last week, about 30 intellectuals, politicians and journalists, including Nobel laureate Mario Vargas Llosa, presented, on the steps of the congress, a document opposing independence.

“There’s a threat to the unity of Spain and it’s important that those Spaniards who defend the constitution are mobilised,” said Vargas Llosa.

A day later another group of prominent personalities presented an equivalent text, also in Madrid, albeit with a more conciliatory tone. Titled “A Federal Spain in a Federal Europe”, it called for a constitutional reform granting Catalonia increased autonomy but not full independence.

This “third way” solution to the standoff appears to be gaining traction, with the Socialist opposition and Catalan business leaders among those who are lobbying for a federal formula. At a dinner last month with other major corporate figures, Catalan industrialist Joaquim Gay de Montellà reportedly proposed several specific constitutional changes, such as granting Catalonia its own tax office, as well as increased control over cultural and language- related issues.

Mas has repeatedly dismissed initiatives of this kind, arguing that only full independence will satisfy Catalans. However, he has said that if the central government continues to block the November referendum he might instead resort to holding early regional elections, in a bid to highlight the support independence enjoys in the Catalan parliament.