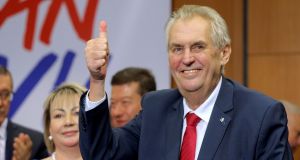 Czech president Miloš Zeman reacts to his victory in the presidential election, in Prague. Photograph: Stringer/Reuters

Zeman won a second term after gaining the backing of voters for his tough stance against immigration and his courtship of Russia and China.

Zeman scored 51.4 per cent to 48.6 per cent for his challenger in the election’s run-off round. Drahoš has conceded defeat in the vote.

Early results had tilted towards Zeman, who drew strong support from smaller districts outside cities that report quickly.

Five of the seven other candidates in the first round of the presidential election had endorsed Drahoš in the run-off.

Zeman (73) is the last prominent figure from the country’s post-communist transitional period in the 1990s among active politicians. He has pleased some but alienated others by publicly belittling opponents ranging from the last prime minister to intellectual elites and the press.

The vote reflected the divisions between liberals and conservatives seen elsewhere in Europe and the US. Zeman has taken a tough stance on immigration and backed Donald Trump in the 2016 US presidential election.

The Czech constitution gives presidents limited executive powers, but Zeman has not hesitated to test the boundaries. In 2013, for example, he appointed a caretaker government of his allies for five months against the will of parliament.

A victory by Drahoš (68) would have brought a voice more in tune with the EU into Czech politics and helped set the country apart from its ex-communist peers Poland and Hungary, which have locked horns with the bloc.

“Zeman never questioned the Czech membership in the EU, but on the other hand he said he would welcome a referendum on exit and in practice he significantly deviated from both EU and Nato, ” said political analyst Michael Romancov.

“It is clear that Jiri Drahoš is unequivocally pro-EU and an euro-Atlantic candidate.”

Zeman has benefited from rising Czech hostility to immigration, especially from Muslim countries, although the country received just 116 asylum applications between January and November last year.

The country has a Muslim minority of just several thousand, but warnings of security risks and loss of identity feature strongly in public debate.

Both Zeman and Drahoš have rejected the EU’s refugee quotas, but unlike Zeman, Drahoš has said his country should differentiate between economic migrants and war refugees and follow the bloc’s asylum procedures.

Prime minister Andrej Babiš, a billionaire businessman who has ruled as a caretaker since his minority cabinet lost a confidence vote in parliament last week, backed Zeman.

Zeman also backs Babiš and had pledged to give Babiš a second chance to form a government regardless of the election result.

The two presidential candidates are as dissimilar personally as they are politically. Zeman is brash, with a self-advertised appetite for alcohol and tobacco. His health is a concern – he suffers from diabetes, which makes him walk with a cane. Drahoš is a soft-spoken chemistry professor.

By the same token, voters were split between those who see Zeman as an embarrassment, and those who think Drahoš is colourless and lacking strong views.

“I did vote for Mr Drahoš because he is clever, I think he will represent our country well,” Prague voter Eva Simakova said.

“Mr Zeman is already in bad health and we have to confess he is a bit of shame for us abroad.” – Reuters