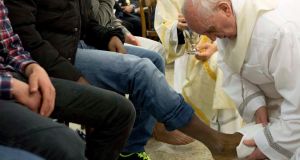 
With yet another of the many symbolic gestures that have marked this initial phase of his pontificate, Pope Francis yesterday evening celebrated the traditional Holy Thursday Mass by washing the feet of 12 inmates of a juvenile prison on the outskirts of Rome.

Two young women were among the 12, the first time a pontiff has included females in the rite.

In an Easter Week which began on Palm Sunday with the pope inviting young people to join him for World Youth Day in Rio de Janeiro this summer, Pope Francis kept his focus on young people with this visit to Casal del Marmo.

During his time as archbishop of Buenos Aires, the then Cardinal Bergoglio used to celebrate this Mass in a prison, hospital or hospice for the poor and the marginalised. The Vatican explained this week that, as pope, he wishes to continue that practice.

The relatively small Casal del Marmo houses just under 50 inmates, male and female, between 16 and 21.

A majority of the inmates are North African or Romanian, serving sentences which range from theft to homicide. Although this was the first time a pope celebrated the Holy Thursday Mass at the prison, both Francis’s predecessors, John Paul II and Benedict XVI, visited the structure, in 1980 and in 2007 respectively.

Last night’s Mass was a private one with only prison personnel, inmates and the Italian minister for justice, Paola Severino, in attendance.


Significance of act
Earlier yesterday, Pope Francis had indicated the meaning of this prison Mass during his homily at his first Chrism Mass, celebrated in the Basilica of St Peter’s, saying: “The readings and the psalm of this morning’s Mass speak of God’s ‘anointed ones’: the suffering Servant of Isaiah, King David and Jesus our Lord. All three have this in common: the anointing that they receive is meant in turn to anoint God’s faithful people, whose servants they are; they are anointed for the poor, for prisoners, for the oppressed . . .”

In keeping with the initial thrust of this pontificate, the pope also indicated this week that he will not – at least for the time being – be moving into the papal apartment in the Apostolic Palace. Rather he intends to remain in the much more modest surrounds of the Domus Santa Marta.

This is a sort of in-house Vatican hotel which, when it is not housing cardinals for a conclave, serves as a B&B for visiting prelates and church functionaries.