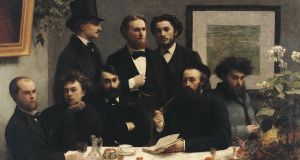 “Arthur Rimbaud and Paul Verlaine. have enriched our heritage through their genius,” begins a petition sent to French president Emmanuel Macron earlier this month. “They are two symbols of diversity. They endured the implacable homophobia of their epoch. They are the French Oscar Wildes.”

The petition asks for the poets’ remains to be transferred to the Panthéon, France’s temple to its great men. It is signed by Macron’s flamboyant minister of culture, Roselyne Bachelot, nine former culture ministers and numerous writers and politicians. And it has provoked a uniquely French politico-literary controversy, which for once is not along left/right lines.

Bachelot told Le Point magazine that Rimbaud’s verses “accompany me every moment of the day”, that she arrives at cabinet meetings with Rimbaud’s The Drunken Boat running through her head. She quoted from memory:

“As I was going down impassive Rivers

I no longer felt myself guided by haulers

Yelping redskins had taken them as targets

And had nailed them naked to coloured stakes.”

The “Panthéonisation” of a homosexual couple would recognise diversity, say the three men at the origin of the petition. They are Jean-Luc Barré, the publisher of a biography of Rimbaud, the France Culture journalist Frédéric Martel, author of The Pink and the Black: Homosexuals in France since 1968, and Nicolas Idier, speechwriter to prime minister Jean Castex.

On a visit to Rimbaud’s resting place in Charleville-Mézières, northeastern France, the three were horrified at the poet’s “narrow, stingy tomb”, and that he should be buried alongside his overbearing, pious mother and hated brother-in-law, Paterne Berrichon. After Rimbaud died of cancer at age 37, Berrichon insisted he was not a homosexual and that he embraced Catholicism on his deathbed.

The petition also objects to the “dreadful plastic flowers” on Verlaine’s grave in northwest Paris.

Emphasis on the poets’ torrid love affair has given the impression the petition is motivated more by their sexuality than their oeuvre. They were in fact bisexual. Rimbaud lived with an Ethiopian woman in Aden, and said he would marry a woman who would travel with him.

Rimbaud was 16 when he sent The Drunken Boat to Verlaine, 10 years his senior. They became lovers. If the two were sent to the Panthéon, Régis Jauffret, a critic of the proposal, argues, “it’s only a matter of time before people say it was an abusive relationship”.

Verlaine, an alcoholic, beat his young bride Mathilde, then left her and their infant son for Rimbaud in 1872. They were together only four years, not counting the 18 months Verlaine spent in prison for shooting Rimbaud in the wrist in a Brussels hotel room. When Verlaine emerged from prison, Rimbaud knocked him out in a fight and abandoned him on a river bank. They never saw each other again.

The petition cites two uses of the poets’ verses as political justification for moving them to the Panthéon. A BBC broadcast of Verlaine’s “The long sobs of autumn’s violins/wound my heart with a monotonous languor” signalled to the Resistance that the Normandy landings were about to take place in 1944. Rimbaud’s motto, “Change life” was used by the May 1968 revolution and by former president François Mitterrand.

But Rimbaud’s writings indicate he was a self-hating Frenchman. Martel brushes off Rimbaud’s sarcastic remarks about the 1871-73 Prussian occupation. “That is France: the critic, the rebel, the man in revolt,” Martel says.

Rimbaud produced three astonishing books of poetry by the age of 20, then stopped writing. “The man with soles of wind,” as Verlaine called him, was a vagabond and jack-of-all-trades who wandered across Europe, Africa, the Middle East and Asia. He ran guns in Abyssinia (Ethiopia), and may have traded in slaves. None of the 73 men and five women enshrined in the Panthéon were perfect, Martel shrugs.

Perhaps the strongest argument against sending Rimbaud and Verlaine to the Panthéon is that they would have hated it.

In 1871, Verlaine asked his fellow Communards to shell the Panthéon. Victor Hugo is the only poet there, though for political reasons. Verlaine deplored the fact that Hugo was “stuck in this cellar where there isn’t any wine”.

Étienne Carjat’s 1871 photograph of the angel-faced, blue-eyed Rimbaud with his tousled hair is an enduring symbol of youthful rebellion. Were Rimbaud alive today, says the academic Denis Saint-Amand, “he’d be wearing a gilet jaune”.

“Let us not inflict on Poor Lelian [as Verlaine called himself] and his shameless accomplice a posthumous snub,” writes Étienne de Montety, literary editor of Le Figaro. “Let us not insult their frenzied quest for independence.”