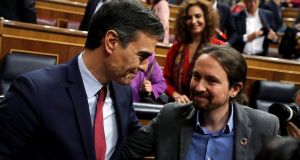 Spain’s Socialist leader Pedro Sánchez has won a parliamentary investiture vote, allowing him to form the country’s first-ever coalition government of the modern era and opening the way to negotiations aimed at solving the Catalonia crisis.

Mr Sánchez’s candidacy secured a simple majority on Tuesday, receiving 167 votes in favour and 165 against, with 18 abstentions.

His victory ends eight months of political impasse. Although he won a general election in April, he was unable to form a government, leading to a repeat ballot in November, which his Socialists also won, although again falling short of a majority.

“Having come this far, you can do one of two things,” Mr Sánchez said to opposition parties as he addressed Congress before the vote. “You can keep having a tantrum or you can accept the result of the elections.”

The Socialists will form a minority government alongside the Unidas Podemos coalition, to their left, made up of Podemos and the United Left. This is Spain’s first such governing partnership since the return to democracy four decades ago.

For Podemos this was the culmination of six years which began with it as a disruptive new arrival in Spanish politics. The party’s leader, Pablo Iglesias, was in tears as he celebrated the result of the parliamentary vote.

Mr Sánchez also required the support of an array of smaller regional parties in order to secure the simple majority and there was uncertainty over whether he would be successful until the last minute.

Such was the concern at the parliamentary arithmetic that Socialist MPs were ordered to spend Monday night in Madrid in order to avoid being delayed and missing the crunch vote. Aina Vidal, of Unidas Podemos, attended the congressional session despite having revealed that she was seriously ill with cancer.

Tuesday’s session followed a first vote on Sunday, which Mr Sánchez lost after falling short of an absolute majority. The debate leading up to that vote was rowdy and at times hostile. The far-right Vox party left the chamber as a representative of the pro-independence Basque Bildu party spoke, due to its alleged links to the now-defunct terrorist group Eta.

Vox and its fellow parties on the right, the Popular Party (PP) and Ciudadanos, have fiercely criticised Mr Sánchez for relying on the abstentions of Bildu and the Catalan Republican Left (ERC) to form a government.

PP leader Pablo Casado warned that the new administration will be a radical coalition and he accused the Socialist leader of being “a Trojan horse that seeks to destroy Spain”.

Mr Sánchez denies such accusations and has defended the need for dialogue in order to resolve the crisis in Catalonia. In talks with ERC leading up to the investiture he agreed to open a series of negotiations with the Catalan government in an effort to find a solution that would be voted on by the region’s people. However, Mr Sánchez has ruled out the holding of a Scotland-style binding independence referendum.

Mr Sánchez is due to be sworn in as prime minister before King Felipe VI on Wednesday.