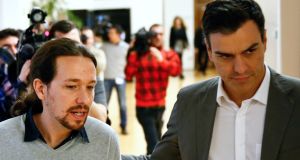 A few days ago, Pablo Iglesias, the leader of Podemos, voiced his frustration at the slow pace at which a new government was being formed, over six weeks after inconclusive general elections. “At this rate, we’re all going to have grey hair before we have a government,” said the ponytailed 37-year-old.

The highly fragmented nature of the new-look Congress means the stalemate could last many weeks more, possibly culminating in fresh elections in early summer if there is no solution. But finally, formal negotiations have begun this week, after Socialist leader Pedro Sánchez accepted King Felipe’s invitation to attempt to gain the support necessary to become prime minister.

Sánchez has asked for “three weeks to a month” to reach out to other parties ahead of a congressional confidence vote which he would need to win, either with an absolute majority, or, as looks more likely, a simple majority.

The king made the invitation after acting prime minister Mariano Rajoy turned down the chance to form a government in the knowledge he stood little chance of success, given the Socialists had warned they would vote against his conservative Popular Party (PP). While observers are divided over whether Rajoy’s decision was driven by logic or political cowardice, the consensus is that Sánchez, whose party came a disappointing second in the December election, is in the driving seat.

“For a party that got the worst results in its history with just 90 seats, it can’t be denied that the post-electoral fallout is quite extraordinary,” wrote political consultant Iván Redondo in El Mundo newspaper.

But forming a government in the current climate is going to be enormously challenging. Not only does Sánchez have to deal with the demands of potential governing partners, he also has to manage dissent within his own party, which has at times threatened to boil over after the poor election result.

Simón and many other analysts believe there are two obvious governing solutions for Sánchez. One would be to persuade Podemos, which has 69 seats, to back him in the confidence vote along with several other, smaller, parties such as the PNV moderate Basque nationalists and the communist-led United Left (IU); the other would be a more straightforward partnership with Podemos, with the abstention of the liberal Ciudadanos (with 40 seats) allowing Sánchez to become prime minister. With Rajoy isolated, the focus will be on whether Podemos and Ciudadanos can find common ground with the Socialists.

Both of these new parties have rejected the notion of governing together, due to their clashing agendas on Catalonia’s ongoing bid for independence and their vision of the economy. The Catalan problem is particularly divisive.

While Podemos wants to hold a referendum in the northeastern region on independence, the staunchly anti-nationalist Ciudadanos opposes any such plan, as do the Socialists, who advocate a reform of the constitution.

“The Catalan referendum is the issue that most divides the parties,” says polling expert Kiko Llaneras, of the Politikon social sciences collective. “If the negotiations make any progress, it’ll be on social and other related issues.”

But Sánchez has handled that offer – which some have described as an ambush – with caution and despite the pressures, he seems determined not to rush the negotiation process. This week he has been upbeat following initial encounters with several party leaders, including Iglesias and Albert Rivera of Ciudadanos, sending out the message that a governing partnership, if not a formal coalition, is going to be possible.

But all parties involved in this unprecedented situation will be keeping an eye on the polls as well as the clock. Podemos and the PP would be the likely beneficiaries if fresh elections were held, according to a poll by the CIS national research institute, with the Socialists and to a lesser extent, Ciudadanos, expected to lose ground.

So far, those electoral swings have been small, but Llaneras says that all parties will want to avoid being seen as the cause of a national deadlock.

“If any of the parties start to get punished hard by voters in the polls, then they will see that as an incentive to reach agreements,” he says.