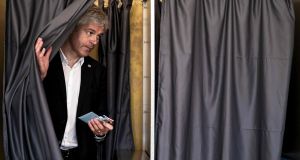 The French conservative party Les Républicains, the heir of Gen Charles de Gaulle and the political camp of presidents de Gaulle, Pompidou, Chirac and Sarkozy, is in such a shambles that its very survival is in question.

The president of the Senate, an avuncular LR stalwart called Gérard Larcher, summoned leading members of the party late on Tuesday, with the goal of “building a new project starting with the countryside”.

Hardline party president Laurent Wauquiez resigned on Sunday night, live on evening television news, one week after LR won only 8.48 per cent of the vote in the EU election. Polls had predicted it would place third, on 13 per cent. It was the party’s worst showing since de Gaulle founded the Fifth Republic in 1958.

“Victories are collective. Failures are solitary. I must assume my responsibility,” Wauquiez said.

The fact that LR presidents of the associations of French mayors and heads of departments and regions attended Larcher’s meeting on Tuesday night shows how deeply it is rooted outside the big cities. The Senate is meant to represent “the territories”, or peripheral France. Larcher knows that if LR stands a chance of rebirth, it must hold on to local governments in the March 2020 municipal elections.

President Emmanuel Macron is eager to build a base outside the cities, and has already begun recruiting candidates for his party, La République en Marche, for the municipal poll.

Between the bitter disappointment of the European election results and Wauquiez’s resignation on Sunday night, LR politicians deserted the party in such large numbers that another LR senator spoke of a “haemorrhage” and “charters full of LR mayors ready to join Macron”.

The party has had an extraordinary run of bad luck. First Nicolas Sarkozy was defeated by François Hollande in 2012. A power struggle between Jean-François Copé and François Fillon then tore it apart. Fillon looked certain to win the 2017 presidential election, but imploded in a scandal over fake government jobs for family members. The constitutional council decided last month that Sarkozy will stand trial in the long-running Bygmalion scandal over campaign financing.

Perhaps more harmful than in-fighting and corruption, LR found it impossible to define a clear, united political line. The traditional Catholic wing of the party, which includes Wauquiez and François-Xavier Bellamy, the young philosophy professor from Versailles whom he chose to lead LR in the European election, opposed abortion, same-sex marriage and assisted procreation for gay couples.

When he took over the party at the end of 2017, Wauquiez promised to represent “the right that is truly right-wing”. He accused Macron of being soft on Islam and spoke of “resistance” to settling migrants in the Auvergne-Rhône-Alpes region, of which he is president.

The anti-Islam, anti-migrant stance was meant to appeal to followers of Marine Le Pen’s far right Rassemblement National. Wauquiez hoped to lure them back to his “true right”.

Instead, Wauquiez’s mix of policies had something to displease everyone. Centre-right members liked LR’s support for the EU and liberal economics, but Macron did both better. They also disapproved of Wauquiez’s social conservatism and hard line on Muslims and immigration.

Hardline LR members liked the message on Muslims and immigration, but Le Pen did both better. And they were wary of Wauquiez’s liberal economics and derogatory remarks about welfare freeloaders.

Les Républicains were drained at both ends of the politial spectrum, with the far right flocking to Le Pen’s RN, and centrists rallying Macron. “If the right conceives of itself as a proxy for [Macron’s] En Marche, or if it creates a big, soft centre-right party, or if it answers the siren call of the extremes and runs after the RN, it will be dead,” Wauquiez predicted in an interview with Le Figaro.

Now Le Pen, Macron and their allies are fighting over the remnants of LR. “We hold out a hand to all patriotic LR officials and voters,” Le Pen tweeted after Wauquiez’s resignation. Her niece and probable successor as leader of the far right, Marion Maréchal, said it was “indispensable that from this debacle an LR emerges which accepts the principal of a big coalition with the RN”.

Wauquiez, like his former mentor Sarkozy before him, was his own worst enemy. He told students in Lyons in 2018 that Sarkozy had the mobile phones of his cabinet ministers tapped. Despite Sarkozy’s anger over that, the two men are scheduled to lunch together on Wednesday. Some on the right envisage the return of Sarkozy as a tutelary figure.

Wauquiez’s greatest error may have been his initial support for the gilets jaunes or yellow vest demonstrators, which offended right-wing voters enamoured of law and order. He later denied having donned a yellow vest himself. When photographic proof was produced, Wauquiez claimed he had “forgotten”.