CRS riot police and some public workers have threatened strike as they feel inadequately protected against Covid-19. What could be more French? 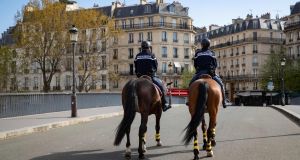 The negation of the basic values of liberté, égalité and fraternité has brought out the rebellious streak in the French, and heightened perennial tension between an overbearing central state and citizens who behave like unruly children.

There is no liberty when people are ordered to spend 23 hours a day at home.

“I cannot stand being locked up,” a 20-year-old man told a judge in Mulhouse, where the French epidemic started, when he was sentenced to two months in prison for repeatedly breaking lockdown regulations.

Since the lockdown started police have checked the documents of more than eight million people who ventured outside, and issued 480,000 fines.

The weekend of April 4th-5th was to have marked the start of the Easter break. The country mobilised 160,000 police and gendarmes to prevent the French travelling to holiday destinations.

The pandemic tends to confirm national stereotypes, my colleague Derek Scally observed last week from Berlin. While Germans snitch on rulebreakers, the French compare notes about the most efficient ways of cheating. You can fill out the required form in pencil, then erase and change the time you went out, as needed. Or carry two forms, destroy the first and fill out the second when your hour of liberté is expended.

Police can be overzealous. One couple were fined for filling out a single form for two people. So was a man who went out to purchase sanitary napkins for his wife. “If she really needs them, she can go out herself,” the cop said.

Cows in a pasture

French ineptitude at queuing could be a symptom of fierce individualism. Because a reduced number of shoppers are allowed in at a time, supermarkets paint thick white lines on the pavement outside to indicate safe social distancing. Otherwise there is no orderly queue, only people milling about like cows in a pasture.

In a country that has retained many trappings of the ancien régime, égalité was always something of a fiction. Commentators nonetheless harp on inequality in the face of the virus, with widespread suspicion that the privileged enjoy access to masks and tests denied to The People.

The bourgeoisie are resented for living in spacious homes or escaping to country houses while the poor run greater risks of contracting Covid-19 in cramped public housing.

In the absence of bars, cafes, restaurants and dinner parties, fraternité is reduced to the telephone and social media. My neighbours and I converse in the stairwell, each person standing on his or her landing, invisible to the other.

At 8pm, windows fling open as the denizens of the rue de Bellechasse applaud medical personnel on the frontline of the epidemic. For a few moments one feels there is strength in numbers. I had not imagined we were so many.

The woman I call my French maman, who I lived with many decades ago when I was a student, lives three blocks away. Nicole is 88 years old, and I worry about her. The first time I left books on her doormat she waved at me from her balcony. The second time she opened the door when I was just a few steps down the stairs, so I stayed two metres away and talked to her.

“I go out every day,” Nicole announced defiantly.

“That’s against the rules!” I scolded.

“I am not a doddery old woman. They’ve turned us into pariahs!” she complained.

Her one concession to the epidemic is to wash her hands on returning home from her outings. No surgical mask. No latex gloves. No disinfecting purchases or leaving shoes and coat on the landing.

As a retired doctor, Nicole ought to know better, I pleaded. She gave a Gallic shrug. What did her grown children say? “They respect me and they think I have the right to do what I want to.”

The French are inveterate contrarians, Nicole admitted, laughing. “We only know how to do one thing: revolutions. Then we think we’re better than everybody.”

CRS riot police and public sector workers from the Communist CGT trade union have threatened to go on strike because they feel inadequately protected against the epidemic. What could be more French?

Albert Camus wrote of his love for that spark of revolt in humankind which refuses to accept the absurd.

It was their act of rebellion against the epidemic, and it was incredibly uplifting.