Owner could not be tracked down despite ‘extensive investigations’ 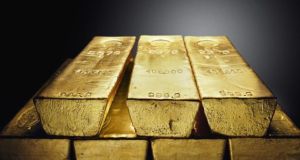 The owner of gold bars left on a Swiss commuter train last year remains a mystery, according to local reports.

The bars, valued at 182,000 Swiss francs (€169,383.47), were found last October inside a parcel on a train bound for the lakeside city of Lucerne, according to a June 2nd notice in the local gazette. While the weight wasn’t given, calculations at current prices mean the bars weighed about 3.45kgs, approximately two copies of War and Peace.