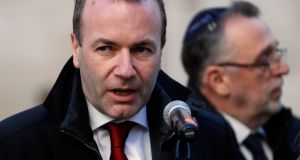 Mr Weber visited Budapest on Tuesday to seek concessions from the pugnacious Mr Orbán that would persuade other EPP members not to back a motion to expel or suspend his Fidesz party in a vote scheduled for March 20th.

The German conservative said the talks “had a constructive atmosphere but problems are not yet solved ... As the EPP we have clear fundamental values and these values are not negotiable for us, so they have to be respected from all our member parties”.

“There are a lot of questions on the table that are not so easy to answer, and you will see in the next few days how Viktor Orbán will react on this.”

Fine Gael is one of 13 EPP members that have called for the expulsion of Fidesz, and the group now faces a dilemma over whether to punish Mr Orbán’s party for its increasingly radical rule or make peace ahead of May’s European elections.

The EPP has been under growing pressure to respond to Mr Orbán’s expansion of government influence over Hungary’s law courts and media, and his hard-line policies that target refugees and migrants, NGOs and the liberal Central European University (CEU) founded by Budapest-born billionaire George Soros.

Mr Weber said Mr Orbán must end the poster campaign and his harsh anti-EU rhetoric; apologise to fellow EPP members for the trouble he has caused and for describing his critics in the group as “useful idiots”; and ensure the CEU can remain in Budapest rather than being forced to move most courses to Vienna.

The offending posters along Mr Weber’s route from the airport to the city centre were removed before his arrival and he called it a “first, small, positive signal” that Mr Orbán agreed to take down the rest of the billboards this week.

Mr Weber said the CEU was the main issue, however, and he visited the university and held talks with its rector before meeting Mr Orbán and then Hungarian Jewish leaders.

The EPP chief said he had proposed a solution involving the Technical University of Munich and funding from carmaker BMW, which would “overcome the old debates” and allow CEU to keep offering US-accredited degrees in Budapest.

Mr Orbán’s government has previously denied using education reform to target CEU and rejected EU and US calls to seek compromise with the university, which has become one of the region’s leading academic institutions since it was founded by Mr Soros in 1991.