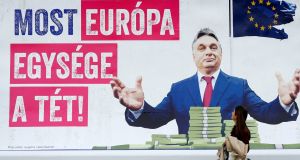 A 2018 billboard showing Hungary’s prime minister, Viktor Orban, which reads, “First he just wanted to take our money, now the unity of Europe is at stake”, outside the European Parliament in Brussels. Photograph: Francois Lenoir/Reuters

Hungarian prime minister Viktor Orbán’s nationalist Fidesz party is sending mixed signals on whether it will respond with compromise or confrontation to the threat of expulsion from the main conservative bloc in the European Parliament.

The European People’s Party (EPP) faces a similar dilemma, as it chooses between reaching yet another accommodation with the pugnacious Mr Orbán and potentially losing the seats that Fidesz will deliver in May’s European elections.

Fine Gael this week became the 13th member of the EPP to call for Fidesz to be expelled at the group’s meeting on March 20th.

Mr Orbán’s Eurosceptic, anti-immigration government – which is broadly popular with Hungarians – is subject to EU legal action over its hardline policies on asylum, NGOs and education, and faces the bloc’s article 7 disciplinary procedure over broader concerns for the rule of law and democracy in Hungary.

EPP leader Manfred Weber urged Mr Orbán this week to end his anti-EU rhetoric, apologise to EPP members and guarantee the future in Budapest of the Soros-funded Central European University (CEU), which is moving most courses to Vienna due to government policies that target its operations.

“We listen to other opinions, including Weber’s. But more important than party discipline are the defence of European Christian values and stopping migration. On this, we cannot yield,” government spokesman Zoltan Kovacs tweeted.

He also said criticism over CEU “is not valid. Our rules and laws apply to every institution of education in Hungary equally, no exceptions not even for the Soros university.”

The combative tone was taken further on Thursday by Magyar Nemzet, a newspaper widely seen as a Fidesz mouthpiece, which used an editorial headlined “A new alliance!” to suggest the party join forces with European nationalists.

“The time has come for Fidesz to stop the humiliating haggling with the European People’s Party,” the newspaper wrote.

“The [EPP] no longer defends nations, or Christianity, or the traditional family model or any other European tradition we can name. The people’s party has become the servant of sick liberalism.”

He also confirmed that the offending posters would come down next week, a move Mr Weber welcomed as “a good signal”.

Mr Orbán – who calls his EPP critics “useful idiots” – has said Mr Juncker will be replaced on the billboards by Frans Timmermans, leader of the EPP’s main election rivals the European Socialists.