Orbán and Salvini call for anti-immigration surge in EU elections 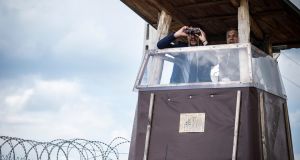 Hungary’s populist prime minister Viktor Orbán has urged the main centre-right bloc in the European Parliament to join him in working with nationalist Italian interior minister Matteo Salvini to “save” the continent from migration and liberalism.

The proudly illiberal Mr Orbán showed Mr Salvini the security fence that his government built on Hungary’s southern border in 2015 to keep out refugees and migrants, and the pair called for a strong surge to the right in European elections on May 26th.

The meeting will put more strain on relations between Mr Orbán’s Fidesz party and other members of the European People’s Party (EPP) – including Fine Gael – which suspended Fidesz in March over its increasingly hard-line policies and rhetoric.

Mr Orbán insists Fidesz agreed to the suspension and warns that if his party faced expulsion it would quit the EPP and look to join an anti-immigration alliance in Europe, possibly of the type Mr Salvini is now assembling.

“Whether we remain members of the European People’s Party or not depends on which way the EPP goes. We will decide our own destiny,” Mr Orbán said.

“Neither now nor after the elections will I abandon my view that the EPP should work with parties to the right of it. There is now a need for an alliance of right-wing forces that oppose immigration.”

Senior EPP figures have expressed annoyance at Mr Orbán’s support for the nationalist Mr Salvini but, after describing the Italian this week as “the most important person in Europe today”, the Hungarian leader again lavished praise upon his guest.

“We are openly seeking ways to co-operate with Mr Salvini,” said Mr Orbán, an ardent admirer of Donald Trump, who is due to meet the US president in Washington on May 13th.

“I want to work with energetic and lively people, because Europe is tired,” he added. “Parties like Mr Salvini’s are greatly needed in Europe.”

Mr Salvini, the leader of the far-right Lega party, who is also Italian deputy prime minister, said his view on immigration was “identical” to Mr Orbán’s, who claims it poses a mortal danger to Europe’s security, prosperity and identity.

“We want a different Europe, one that defends security and boosts jobs, the family and the Christian identity of our continent ... You can only enter Italy, Hungary and Europe if you have permission,” Mr Salvini declared.

He said “the problem is not to redistribute the migrants who are already here but to stop them arriving”.

“We are counting on a new Europe that will be born after May 26th, which will aim to protect its external borders,” he added.

Both men suggested they would not decide on any formal co-operation until after the elections, which Mr Orbán hopes will serve as a major step towards anti-immigration forces taking control of all the main EU institutions.

Fidesz believes the EPP wants the seats it can deliver too much to expel it before the election, but the leader of Germany’s Christian Democrats, Annegret Kramp-Karrenbauer, issued a warning to Budapest this week.

“If Orbán chooses to move further away from the EPP, there is no way back to the EPP for him and Fidesz,” she said.

On Thursday Markus Söder, the head of Bavaria’s conservative Christian Social Union, said: “It is clear to us that there is and can be no co-operation with right-wing populists in Europe.”

“Hungary is becoming a difficult issue and we still regret it,” the Süddeutsche Zeitung quoted him as saying.

“We had hoped that the reprieve given by the EPP to the Hungarians would be used positively, but a meeting with Salvini is the wrong signal.”