Oligarch taking care of business in eastern Ukraine for Kiev 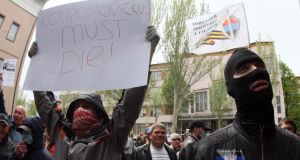 A pro-Russian militiant holds a placard reading “ Kolomoisky must die!” during the attack of a branch of Privatbank in the eastern Ukrainian city of Donetsk in April. Photograph: Alexander Khudoteply/AFP/Getty Images

At a checkpoint on the road from Donetsk to Dnipropetrovsk, a member of Ukraine’s national guard tells men to get out of their car and lift their shirts.

He’s checking for marks, he says, for bruises left in the crook of the shoulder by the recoil of a Kalashnikov rifle: “Terrorists have them,” he explains.

At the next roadblock, on the edge of the city that has become a bulwark against Moscow-inspired chaos further east, guards have written a blunt offer on a blue-and- yellow Ukrainian banner: “If this flag annoys you, we’ll help you get your stuff and go to Russia. ”

In Donetsk, 250km away, Russia’s flag flies beside that of the local “people’s republic”, and showing support for Ukraine will get you beaten and imprisoned at best, by gunmen who denounce “fascist” Kiev and want to be ruled by the Kremlin.

But in Dnipropetrovsk, the blue-and-yellow flies proudly from countless cars and buildings, and Vladimir Putin, the rebels he calls the “militia of Novorossiya” (“New Russia”) and their colours are objects of derision.

“But we don’t border Russia, so they couldn’t send in busloads of paid provocateurs. And most importantly, our local elite took a principled pro-Ukrainian position. In Donetsk and Luhansk, they wanted to use the trouble to win concessions and favours – they tried to make a barbecue, but burned down their own house.”

Whereas in Donetsk and Luhansk most top Yanukovich-era officials and businessmen – including Ukraine’s richest oligarch, Rinat Akhmetov – fled or took an ambiguous or even supportive stance towards the rebels, Dnipropetrovsk was placed under the control of a Jewish billionaire who put a bounty on their heads.

Akhmetov hid and dithered while Donetsk fell into chaos, but Ihor Kolomoisky strode into office in Dnipropetrovsk, formed a volunteer battalion to fight the rebels and called Putin a “diminutive schizophrenic” who had “lost his mind”.

In return, Putin denounced Kolomoisky as an “imposter” and “scoundrel”, Russia put the local unit of his Privat Bank – Ukraine’s biggest lender – under administration, and Moscow prosecutors added him to their wanted list.

The burly Filatov, a millionaire in his own right, said the pragmatism behind the Kolomoisky team’s financial success also guided its political steps. That toughness and even intimidation were part of the armoury will not surprise those who accuse the team of building a business empire on fear and dirty tricks.

“The pro-Russian forces here were diverse, from communists to Russian Nazis. Some couldn’t stand each other, so we separated the separatists,” explains Filatov.

“We talked to all groups: we explained things, made promises, convinced them, bought some off, scared others. This gave us time to strengthen the security services,” he says, wearily rubbing a big hand over his face.

In Donetsk, Luhansk and Crimea, most members of the police and other security forces turned against Ukraine’s new government, partly in fear of prosecution for deadly attacks on protesters on Kiev’s Independence Square.

In Dnipropetrovsk, Filatov says, prosecutors were told to temper their “revolutionary zeal”, and riot police hurt in Kiev were given proper medical and financial help.

“Officials have pens and paper, but these guys had mortars and machine guns,” says Filatov. “Of course justice should prevail — but at the right time.”

Many fear that the well-armed “Dnepr” volunteer battalion is essentially Kolomoisky’s “private army” and that the oligarch will seek to parlay his patriotic stance into domination of more pro-Russian business rivals like Akhmetov.

Filatov rejects such fears, drains a coffee and looks forward to resuming training for a long-planned space flight with Virgin Galactic.

“To prepare properly, I need less coffee and stress, fewer cigarettes and more sleep,” he says. “When this nightmare ends, I’ll start thinking again about going to space.”