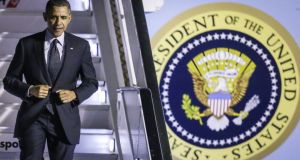 US president Barack Obama disembarks from the Air Force One upon his arrival in Brussels this morning. Photograph: Julien Warnand/EPA

Nato needs to boost its presence in eastern European countries that feel vulnerable to Russia after its annexation of Crimea, US president Barack Obama said today.

Some defence experts have said the Crimea crisis could put Nato membership for Ukraine and Georgia back on the agenda, but Mr Obama said neither country was on a path to Nato membership and there were no immediate plans to expand the 28-member alliance.

Russia’s annexation of Ukraine’s Crimea region has made newer Nato members in eastern Europe, particularly in the Baltics, nervous about a newly assertive Moscow.

On a trip to Europe this week, Mr Obama has been at pains to reassure these countries that the United States and the rest of Nato would defend them if they were ever attacked.

Speaking after a summit with EU leaders in Brussels, Mr Obama said Nato foreign ministers meeting next week should make sure the alliance had up-to-date contingency plans to defend all allies, including those in central and eastern Europe.

Nato should also do more to ensure it puts in place “a regular Nato presence” among states that feel vulnerable to Russian pressure, Mr Obama said.

He gave no details, but said: “I think there are ways that we can do that that can be accommodated by our existing assets.”

US officials have said the Pentagon will more than double the number of US fighter jets on a Nato air patrol mission in the Baltic and do more training with Poland’s air force as it strives to reassure allies alarmed by the crisis in Ukraine.

Nato would intensify military cooperation with Ukraine and “review the viability” of its relationship with Russia, Mr Rasmussen said.

Mr Obama also signalled that the United States will use the Crimea crisis to step up presure on European allies to contribute more to the cost of their own defence.

US officials have long complained that European countries do not spend enough on defence and rely too much on the US umbrella.

Many European governments have slashed defence spending and only a handful of Nato members meet the goal of spending the equivalent of 2 per cent of GDP on their armed forces.

“I have had some concerns about a diminished level of defense spending among some of our partners in Nato,” Mr Obama said.

“That’s understandable when you have an economic crisis ... but the situation in Ukraine reminds us that our freedom isn’t free and we’ve got to be willing to pay for the assets, the personnel, the training that’s required to make sure that we have a credible Nato force and an effective deterrent force.

“So one of the things that I think medium- and long-term we will have to examine is whether everybody is chipping in.”

Mr Obama made no mention of some of the cuts in US defence spending that have drawn the ire of Republican lawmakers.

The Pentagon said a month ago it would shrink the army to pre-second World War levels, eliminate A-10 aircraft and reduce military benefits in order to meet 2015 spending caps.

A divided Nato reached a compromise at a 2008 summit, declaring that the former Soviet republics of Georgia and Ukraine would one day join the alliance, but without setting them on an immediate path to membership.

Georgia’s membership prospects were put on ice after it fought a war with Russia later that year while Ukraine’s former pro-Russian president Viktor Yanukovich, ousted last month, ditched the goal of joining Nato in 2010.

Mr Obama said the Crimea crisis would not put Ukraine and Georgian membership of Nato back on the agenda.

“Neither Ukraine or Georgia are currently on a path to Nato membership. And there has not been any immediate plans for expansion of Nato’s membership.”

He said Russia had voiced concern about the possibility of Ukraine joining Nato while Ukraine’s complex relationship with Russia had held it back from applying to join.

British prime minister David Cameron said he backed former Norwegian prime minister Jens Stoltenberg to take over the Nato leadership from Mr Rasmussen, who is due to step down in September, throwing his weight behind the front runner.