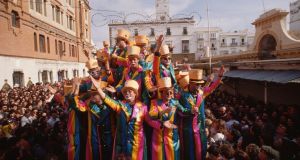 Cádiz has long been host to one of Spain’s most exuberant and renowned winter carnivals, but this year the city’s authorities have outraged traditionalists by banning what is claimed to be a flagrantly sexist feature of the annual festivities.

The southern city’s carnaval, which this years falls in late February, is a big event in Spain’s packed festival calendar and one which is known for its concerts, cultural events, flamboyant costumes and general revelry. The so-called ninfas, or nymphs, are a group of young, local women who are chosen to attend carnival activities and take part in parades in elegant dress. They have become a major part of the festivities, with one of them chosen as the carnival’s diosa, or goddess.

However this year, Cádiz ’s leftist administration has outlawed the participation of the nymphs on the grounds that they are a chauvinistic anachronism that promotes gender inequality.

Last week, it approved the ban, which began as a civic campaign called “For an equal carnival”. The campaign’s manifesto said the parading of the nymphs and the goddess during the carnival risked generating “stereotypes, inferiority complexes and frustrations among our girls and younger women”.

The document also said that while other aspects of the Cádiz carnival had changed with the times, “the nymph got stuck in the past, without evolving – mute, quiet, a spectator, merely a beautiful figure on a float, a hostess handing out prizes, playing very much a secondary role”.

The motion was backed by Cádiz Sí Se Puede, the local branch of Podemos, the Socialist Party and the liberal Ciudadanos. About 50 local personalities and associations signed the original civic campaign manifesto, including women who had previously been carnival nymphs.

“Carnival, like all aspects of society, is sexist,” Susana Ginesta, a 2001 nymph who signed the document, told El País newspaper. “If we remain stuck with figures like the nymphs we’re not going to see progress.”

The tradition, which dates back to the 1950s, has also been criticised as a throwback to the era of the Franco dictatorship, when women’s rights were severely repressed.

However, the ban has upset some who see the nymphs as a crucial part of their carnival. The conservative Popular Party voted against the prohibition and the La Piconera carnival nymphs’ association is mounting an online campaign on change.org to reinstate the custom.

“Freedom to take part in these events shouldn’t mean prohibiting them,” said one of the more than 400 people who have signed the counter-campaign. “Let’s stop banning everything.”