No deal is ‘a terrible alternative’ says France’s Monsieur Brexit 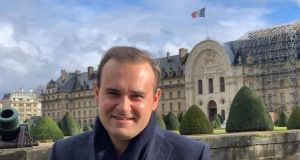 Alexandre Holroyd: ‘We should do anything in our power to have an orderly Brexit, whatever that means, a structured Brexit that doesn’t create crisis on either side of the Channel or in Ireland’

Alexandre Holroyd, age 31, is the Franco-British son of a British businessman and a French speech therapist. He grew up in the Little Paris neighbourhood of central London. As the deputy in the National Assembly representing French citizens in northern Europe, including the UK, he has become the point man in the French parliament for Brexit.

Holroyd drafted two reports that led to the January 19th, 2019 law authorising the French government to issue decrees in preparation for a hard Brexit. On Friday, he will introduce Tánaiste Simon Coveney’s lecture – Brexit, Ireland and Europe at 27– in Paris.

Since the Brexit vote, which Holroyd like many others failed to foresee, he promised not to make further predictions. He does not know if Britain will crash out, delay its departure or hold a second referendum. But he tends to think Brexit will happen, since both the majority and opposition in the Houses of Parliament appear to want it.

'We have a moral obligation to protect those who have settled here under EU citizenship, which they assumed was for life'

Holroyd echoes the Macron administration’s ambivalence about a possible delay. “We should do anything in our power to have an orderly Brexit – whatever that means – a structured Brexit that doesn’t create crisis on either side of the Channel or in Ireland,” he explains. “But for that to happen, one of the parameters has to change, or we’ll simply end up in a month or two with the exact same situation. By all means, delay away. But delay for a reason.”

Holroyd holds the British parliament responsible for the blockage. “The UK is struggling to find a position it can validate,” he says. “The biggest symbol of this is that a deal negotiated by the prime minister, who has a majority in parliament, was resoundingly rejected by her majority. This problem lays in Westminster, and there is very little that can be solved from Brussels or Dublin or Paris. It really is a British domestic political problem.”

In his 234-page report, published in December, Holroyd estimates that 1,715 British citizens enjoy the status of civil servants in France, which depends on their belonging to an EU member state. “One of the things I insisted on very much when we adopted the law is that the British here should keep as much of their rights as possible ... The British living in France, for me, are a moral issue. We have a moral obligation to protect those who have settled here under EU citizenship, which they assumed was for life.”

The Channel Tunnel “is a fundamental economic issue”, Holroyd says. Nineteen million people and two million lorries pass through it every year. “It’s the only place where you have carry-on, carry-off. If you have a factory on one side and a factory on the other and there has to be a lot of back and forth, that’s the way you transport materials. The reality of the single market is that our economies are completely intertwined, which means that delays, any friction, any slowing down has dramatic impact on the competitiveness of these industries.”

The European aircraft consortium Airbus employs 15,000 people in the UK, while another 117,000 jobs are held by subcontractors to Airbus. These jobs, Holroyd notes, “depend strongly on the free circulation of aircraft parts between the UK and industrial sites in the rest of the EU”.  Airbus manufactures wings in the UK, for assembly in Toulouse. “It’s impossible to make a plane without wings,” he sighs.

Chaos in the fishing industry is also a great source of concern in the event of a hard Brexit. “A very significant part of fishing by Spanish and French fishermen takes place in British waters,” Holroyd explains. “You can have fish caught by Scottish fishermen in French waters sent to Boulogne for processing and then sent back through the Tunnel to be sold in London. That’s how integrated things are.”

Holroyd draws two principle lessons from Brexit. The first is that politicians must heal the divide “between cities that are prosperous and those areas which have been left behind, especially post-industrial areas”.  Whether it’s the Brexit vote or electoral result maps for France, Italy and other EU countries facing populist nationalist movements, “That gap is splitting our societies,” Holroyd says.

'There will be a very significant impact if there is a hard Brexit. It is a terrible alternative collectively. It is a bad one for us, and a horrific one for the UK'

He also blames European politicians “who have criticised Europe for the past 20 years while taking credit for everything good... This Europe-bashing fails utterly to take into account the phenomenal benefits that Europe has brought us.”

Holroyd has been crucial to France’s Brexit preparations. But being ready does not mean that nothing will change, he stresses. “This [French] law [on Brexit] will enable us to mitigate some of the worst impacts ... But there will be a very significant impact if there is a hard Brexit. It is a terrible alternative collectively. It is a bad one for us, and a horrific one for the UK.”