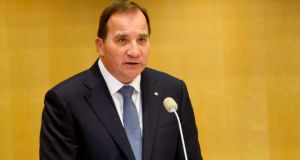 In his first speech to the eight-party Riksdag parliament, in which his government holds just 38 per cent of seats, Mr Löfven announced that Sweden would recognise the state of Palestine. “In this difficult parliamentary situation we must find a way forward,” he said, “and put Sweden’s best interests before tactics and prestige.”

His government will face a tricky task of securing the support of opposition parties over its upcoming policies, including a reversal of tax and welfare cuts and a tightening up of regulation of private operators in the public sector.

The difficult balancing act ahead to survive in parliament was reflected in Mr Lövfen’s speech yesterday, promising a fairer Sweden that would also be more competitive. Appealing for “unity and a joint responsibility” in the coming term, his coalition is likely to bank on the opposition Left Party for support in the upcoming budget.

In the years ahead, he will reach out to the opposition Centre and Liberal parties to tackle record unemployment of eight per cent.

To defuse fears Sweden had elected a new high-spend, high- tax government, Mr Löfven signalled any boost to unemployment benefits will be modest, while plans to increase VAT on restaurant bills may be ditched.