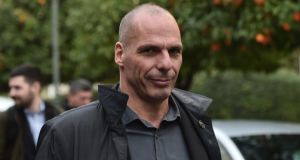 If Greece’s new tie-less prime minister appears unconventional when compared with his EU counterparts, then his freshly appointed finance minister will look even more out of place when lined up beside colleagues at his first meeting of the Eurogroup.

An economics professor who has taught at universities in Athens, Australia and the US, Yanis Varoufakis defies the stereotype, given his shaved head, leather jacket and flamboyant shirts.

Varoufakis (53), is a self- styled “accidental economist” who is described as being influenced by Keynes, with some traces of Marx.

He has been a forthright critic, on his blog and in the media, of conventional wisdom and approaches to what he has condemned as a “self-reinforcing crisis that produces indignity in Greece and feeds Europe’s darkest forces”.

He claims that countries such as Greece and Ireland “took a major hit for the team” in taking bailouts under troika supervision and ended up paying “the price for the fact that Europe was not prepared for the financial crisis” when the shockwaves began battering it in 2008.

In Greece, that resulted in unloading “the largest loan in human history on the weakest of shoulders, a bankrupt nation, on the condition that we shrunk our incomes substantially. Everyone knows that can’t work.”

Now that he’s at the helm of Europe’s most troubled economy, Varoufakis will play a key role in negotiations with the country’s lenders and in determining their future relationship.

In recent interviews with the world’s media, Varoufakis has struck a moderate note. Ruling out using the threat of a Greek exit even as a tactic, he said he is less interested in the “semiotics and linguistics” of what the solution could be called and more in finding a deal that would be beneficial for average Greek and European taxpayers.

Before completing his PhD in economics, Varoufakis studied mathematical statistics in the UK, at the personal recommendation of Andreas Papandreou, who would become socialist prime minister in the 1980s.

Asked some years ago by this reporter how he rated the Harvard-trained Papandreou as an economist, Varoufakis said the Pasok leader ignored all his economic knowledge after entering politics.

Varoufakis named his first blueprint for resolving the euro zone crisis after Jonathan Swift’s satirical 1729 essay A Modest Proposal, which suggested the impoverished Irish might solve their economic problems by selling their children as food to the rich.

Now a minister, he blogged that he would defy advice “to put up or shut up”.

“For hope to be revived we must all strive to change the ways of a dismal past. Maintaining an open line with the outside world may be a small step in that direction.”