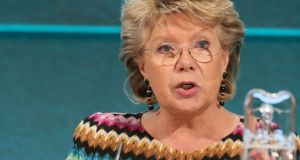 Viviane Reding, European Commissioner for Justice: Croatia’s passing of a law limiting the application of the European Arrest Warrant amounts to “a breach of trust” with the other member states that ratified the country’s application to join the EU. Photograph: Getty


Croatia has become embroiled in a dispute with the European Commission less than two months after joining the European Union.

The conflict, which could result in the EU withholding funds from the Balkan state, concerns Croatia’s decision to amend legislation on the European Arrest Warrant, three days before it joined the European Union on July 1st.


War officials
On June 28th Croatia passed a law limiting the application of the European Arrest Warrant to crimes committed after August 7th, 2002, the date on which the warrant was introduced. The move fuelled suspicion that Croatia was moving to protect officials who participated in the Yugoslav wars.

Germany, in particular, is seeking the extradition of alleged former spy Josip Perkovic, in connection with the assassination of Croatian dissident Stjepan Durekovic in southern Germany in 1983.

EU Commissioner for Justice Viviane Reding wrote to the Croatian authorities at the end of July, warning that the law was in contravention of EU legislation and demanding a reply by midnight last Friday. A spokeswoman for Ms Reding confirmed yesterday that Croatia had not replied to the letter.

“The European Commission deeply regrets that Croatia has not responded to our urgent call with regards to the implementation of the European Arrest Warrant,” the spokeswoman said. “The fact that Croatia’s national legislation has been changed a few days before the accession to contradict EU law on the European Arrest Warrant is really not a minor issue for us. This infringement of EU law goes at the very heart of European judicial co-operation.”

Ms Reding plans to bring the issue to the weekly meeting of EU commissioners next week. It is understood the European Commission’s legal service has been exploring the sanction options available to the EU under Article 39 of Croatia’s accession treaty.

These could include the withholding of EU funds or Croatia’s exclusion from the border-free Schengen area. Any sanction would require the agreement of all 28 EU commissioners.

Croatia has defended its decision, arguing that other countries are eligible for exemptions and time limits in implementing the legislation.

However, the commission said this was available only to member states who negotiated the warrant, and did not apply to states that acceded since then, such as the 10 that joined in 2004.

Ms Reding’s spokeswoman added that during its accession negotiations, Croatia had not raised the issue or requested a transitional or opt-out arrangement. This amounted to “a breach of trust” with the other member states that ratified its application, she added.

Croatia became the 28th country to join the European Union on July 1st this year.