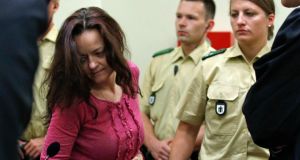 Defendant Beate Zschaepe of the neo-Nazi National Socialist Undergroundarrives for her trial in a courtroom in Munich earlier this month. REUTERS/ Michaela Rehle

After 18 months of hearings by a cross-party committee, its 1,000-page report contains a long list of failures in police investigations of the killing of eight Turkish-born immigrants, a Greek national and a German policewoman between 2000 and 2007.

Only by coincidence, four years after the last killing, did it emerge that the crimes were the work of a group previously unknown to the committee, the National Socialist Underground (NSU). However, German MPs rejected a central accusation of victims’ families: that institutional racism in the police force led investigators to spend years searching for nonexistent links between the killings, the victims and immigrant mafia structures.

Instead the report said overlapping structures and institutional rivalry between bodies in various federal states meant crucial information – even about the weapon, which was used in all 10 murders – was not shared.

“We found no proof that the authorities, during the period of the crimes, knew who was behind them and looked away or even supported the perpetrators,” said Sebastian Edathy, Social Democrat (SPD) head of the parliamentary investigation. “But we come to the clear finding that we are dealing with a massive failure of the authorities and a drastic underestimation of the danger posed by the far-right scene in Germany.”

Trial
The NSU came to light in November 2011 when two of its members killed themselves after a botched bank robbery. A surviving member, Beate Zschäpe, is on trial in Munich with four others, accused of aiding and abetting the killing spree.

Mr Edathy said the German state realised only in 2011 that its “entire security architecture was not attuned to things like far-right terrorism”.

The investigating committee met 75 times and heard from 107 witnesses and experts. However, some left-wing politicians complained they were unable to form a full picture of the investigation failures because of forgetful witnesses and incomplete or shredded files.

In Berlin yesterday, after a meeting with his German counterpart Guido Westerwelle, Turkish foreign minister Ahmet Davutoglu welcomed the “resolute” investigation of the killings. Mr Westerwelle said the report sent the signal that terrorism and extremism have “no place in Germany”.