Nazi past lingers ambiguously in culture of Bavarian capital 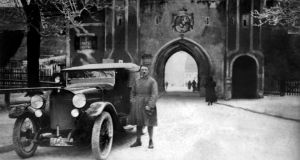 Adolf Hitler outside Landsberg prison after he was released from it in 1924. While serving his sentence at Landsberg he wrote his ‘Mein Kampf’. Photograph: AFP/Getty Images 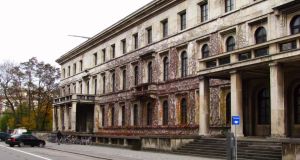 In Bavaria, the Nazi past is seeping up again through the cracks in its historical floorboards.

At a Monday press conference, the world will learn the fate of the suspected looted art hoard – including works by Picasso, Matisse and Chagall – discovered by chance in a rancid Munich flat and made public last year.

News of the find electrified the world and turned the media spotlight on Cornelius Gurlitt, the reclusive guardian of his art dealer father’s collection for half a century until his death last May.

As work continues to identify the rightful owners of the Gurlitt collection works, attention has shifted to the Bavarian authorities. Outspoken critics say their pace and secretive approach to the case is symptomatic of a broader go-slow in how Bavaria has dealt – or has not dealt – with its Nazi past.

With the 70th anniversary drawing near of the second World War’s end, the Bavarian question is already looming large in Germany’s latest round of Vergangenheitsbewältigung – or coming to terms with the past.

Bavaria’s capital, Munich, was both founding city and nerve centre of the Nazi party, but does that mean the Bavarians have a special historical case to answer? And, if so, how has it been dealt with?

You don’t have to look far in Munich to hear complaints over how the state government’s policy towards the Nazi era is one of not having a policy. But opinions diverge sharply on whether this is a deliberate strategy or simply omission through political opportunism.

Munich loomed large in Hitler’s rise to power. In the postwar chaos after 1918, the Bavarian city and its rowdy beer halls offered the failed Austrian painter and returned soldier an ideal stage and receptive audience for his firebrand politics.

Munich was a hotbed of right-wing nationalist opposition to the Weimar Republic, and a logical place for Hitler to co-found his National Socialist Party (NSDAP) in 1920.

A decade later, author Lion Feuchtwanger asked in his novel Success, why “everything that was rotten and bad in the Reich fled, as if by magic, to Munich”.

Local historians insist Munich was not irredeemably Nazi, with the party never scoring consistently high support from voters, largely thanks to strong local Catholic opposition. But, once in office, Hitler bestowed two ideological titles on his beloved Munich: “capital of German art” in 1933 and “capital of the [Nazi] movement” in 1935.

Berlin may have been the Reich capital, but Munich remained the nerve centre of the Nazi movement until 1945.

In the subsequent years, as Munich and other German cities struggled to rebuild their wartime ruins, the daily struggle to survive understandably took precedence over debates on the Nazi era. Once Munich had found its feet, however, critics suggest the city was less interested than others in exploring the dozen Nazi years. Instead it hitched its historical wagon to the memory of King Ludwig and the historical tradition that went before.

Only a few Nazi buildings were torn down, with most simply stripped of swastikas and eagles and still in use today. Some argue that, given the shortage of buildings in postwar days, this was a pragmatic step similar to that in other German cities. But in his book Munich and Memory, historian Gavriel Rosenfeld argues the “normalisation” of Nazi buildings in Munich was a special case, reflecting a “prevailing desire . . . to forget the war and, more specifically, the city’s responsibility for nurturing the political movement that produced the [wartime] destruction in the first place”.

Visit the headquarters of Munich’s Central Institute for Art History (ZIKG) and, even on a dreary November afternoon, you cannot help noticing its malevolent magnetism. It was built in 1935 as the Nazi central administration building. The swastikas and eagles were removed after 1945 and creepers planted to cover the facade. Today’s tenant, the ZIKG, is a key figure in German art research and the ongoing debate over Nazi looted art stirred up again by the Gurlitt case.

ZIKG staff members are also very matter-of-fact about their running battles with what they see as official historical amnesia in Munich. It was only in the mid-1990s, for instance, that the city allowed the ZIKG to erect a plaque explaining their building’s troubled history. Other symbolic battles, such as that for permission to remove the postwar vine camouflage from the irredeemably fascist facade, are ongoing.

In his gloomy office, art researcher Dr Stephen Klingen says the Gurlitt case has been a welcome catalyst in Germany’s long-running looted art saga, forcing German politicians to put their money where their mouth is to finance art provenance research.

But Bavaria’s own response has been mixed, he says, with just two non-permanent research jobs created to investigate problematic works in state art collections.

“When we presented other [provenance research] proposals, the ministry told us that any research would have to be ‘cost-neutral’,” he recalls.

Klingen and his research colleague, Christian Fuhrmeister, both non-Bavarians, see in such reactions official ignorance in Munich of the Nazi era. Many artworks stolen by the Nazis from European museums, for instance, were hoarded en masse in Bavarian castles, monasteries and mines.

A US military government document from 1947 (below) shows just how much remained in Bavaria after the war. The estimated value of artworks returned between 1945-1947 to countries outside Germany totalled $500 million. The value of works turned over to Bavaria’s state premier: $300 million.

“When you consider how immensely Bavaria profited from this art, you realise how disproportional the Bavarian reaction to the looted art problem is,” says Dr Fuhrmeister. “There is an attitude here that Bavaria is super and that the Nazis were Prussian, so it’s Berlin’s responsibility to research and compensate for that era.”

Bavaria’s own Nazi legacy pops up as regularly as Banquo’s ghost in historical debates, such as in the long-running debate over what to do with Hitler’s Mein Kampf.

After the dictator killed himself in 1945, copyright in his political tract and other writings was transferred to the Bavarian state. As rights-holder, Bavaria has kept all works out of circulation in Germany, suing anyone who breached their copyright by reprinting from Mein Kampf.

When the copyright expires next year, however, 70 years after the author’s death, the works enter the public domain and anyone – including neo-Nazi groups – can publish their own editions of the most notorious German book ever.

Hitler back in print

With this deadline looming, the Bavarian government announced it would lift its Mein Kampf moratorium to co-finance a critical edition, contextualised by historians at Munich’s respected Institute for Contemporary History (IfZ). When the first “Bavaria republishes Hitler” headlines appeared, however, the state government performed a U-turn and revoked its financing, citing the concerns of Holocaust survivors and other victims of the Third Reich.

Dr Christian Hartmann, the IfZ historian heading the project, says it will continue regardless, but his eight-member team are working around – and against – the clock to dissect Hitler’s tract line by line and publish in time.

“Mein Kampf has been given the mystique of a Harry Potter enchanted chalice, as if evil will come into the world simply by reading it,” he says. “I see it similar to an unexploded wartime bomb: we have to carefully remove the fuse to make it safe, then put the bomb on display.”

Over tea in his Munich living room, Hartmann says he understands the political sensitivities that prompted Bavaria’s funding U-turn. But this only made a lose-lose situation worse, he says, considering that Mein Kampf is available on the internet and, in printed form, outside Germany (Bavaria doesn’t hold the English-language rights).

The financing decision is curious for a second reason, he says: Mein Kampf contains much of the same material as other writings by Hitler freely available in Germany, such as Hitler’s collected speeches and writings from 1925-1933, published 20 years ago.

“The problem with Mein Kampf is that it’s a book with a symbolic value, but this is not a new problem,” said Hartmann. “The problem is that it’s not at all clear what the Bavarian government’s strategy is before the copyright lapses, or if there is a strategy at all.”

Unlike other critics, the Munich historian doesn’t believe there is a deliberate strategy by Bavaria’s government to gloss over its Nazi past, pointing to his institute’s well-regarded, state-funded museum in Hitler’s former Alpine retreat, Obersalzberg.

Unsurprisingly, government officials in Munich dispute claims it has papered over its Nazi past. Off the record, they concede the Mein Kampf U-turn was a disaster. But, alongside memorials in former concentration camps such as Dachau, Munich has more than 100 Nazi memorials and, from next year, a new publicly funded Nazi documentation centre. Critics remain unimpressed: the majority of Munich’s memorials are to Nazi victims, not perpetrators, they note, while the Nazi centre’s belated arrival – seven decades after the fact – speaks for itself.

As a battle looms over control of the Gurlitt collection, and the clock ticks down on Mein Kampf, Munich city council holds a hearing in two weeks’ time into a final contested issue of the Nazi legacy: why Munich is the only city in Germany to ban stolpersteine, brass pavement plaques to Holocaust victims, in public pavements before the dead’s former homes.

As the past and present intermingle in Munich, the city faces renewed pressure to examine one obstinate historical label – “capital of the Nazi movement” – in a bid to shake off another: Germany’s capital of memory suppression.