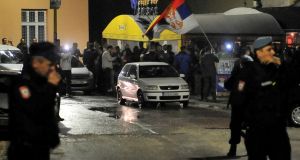 The Muslim mayor of the Bosnian town of Srebrenica has refused to concede electoral defeat to a Serb rival, claiming the vote was marred by major fraud amid rising concern for ethnic relations in a town still recovering from genocide.

Bosnian Serb Mladen Grujicic was on Monday declared the narrow winner of the October 2nd local elections, but incumbent Camil Durakovic is demanding an investigation into alleged irregularities and possible police interference.

Only Bosnian Muslims have served as Srebrenica’s mayor since about 8,000 men and boys from that community were murdered in July 1995 by Bosnian Serb militia.

The local elections were dominated by nationalists from Bosnia’s Muslim, Serb and Croat communities, highlighting the continued failure of western-backed efforts to unify the country following a 1992-5 war that took 100,000 lives.

Mr Durakovic claims Bosnia’s election commission failed to count some 2,000 postal votes that could alter the result, and accuses Mr Grujicic’s allies of bussing ineligible voters into Srebrenica from Serbia, which is just 40km away. He also queries the role of Bosnian Serb police who were deployed to Srebrenica on election night.

Mr Grujicic was supported by Bosnian Serb leader Milorad Dodik and Serbia’s ultranationalist firebrand Vojislav Seselj, but insists his victory was fair and that Mr Durakovic is using desperate measures to retain power.

“This is a false story created by some politicians who are trying to cause trouble between people here,” said Mr Grujicic, a former chemistry teacher whose father was killed by Bosnian Muslim fighters early in the war.

“We need a different approach in Srebrenica. We’ve been living in the past all these years, and couldn’t go forward. Above all we need to boost the economy,” he added.

Like current Serbian and Bosnian Serb leaders, Mr Grujicic calls the Srebrenica massacre a “crime” rather than genocide – rejecting a landmark 2007 ruling on the case from the UN’s International Court of Justice.

Mr Grujicic insists that he will not make any changes to the annual July 11th commemoration of the massacre, but groups representing survivors and victims’ relatives are alarmed at the prospect of a genocide denier running Srebrenica.

Other Muslims in the town – where there is now a Serb majority among about 7,000 residents – say they are willing to give Mr Grujicic a chance, and back efforts to revive a stagnant economy.

Bosnia slow progress towards EU accession faces frequent disruption from within, however, as Mr Dodik seeks to block all efforts to transfer powers from the country’s semi-autonomous regions to the central government.

One week before the elections, Mr Dodik held a referendum in Bosnia’s Serb-run region on whether or not to keep the date of a controversial holiday – despite the highest state court declaring both the current date of the holiday and the vote illegal; later, he rejected an order from state prosecutors to attend questioning about his actions.

“This makes a mockery of Bosnia’s judiciary. But for almost a decade the EU has assisted Dodik in destroying the state-level judiciary and police,” said Bodo Weber, a Balkans expert at the Democratisation Policy Council in Berlin.

The United States has dramatically reduced its post-war role in Bosnia and the EU has repeatedly backed down in disputes with the pugnacious Mr Dodik.

“Now he’s held a referendum and there appear to be no consequences,” Mr Weber said.

“It’s clear the EU has no will to deal with this.”