Moscow to give Ukraine €15bn and slash price of gas 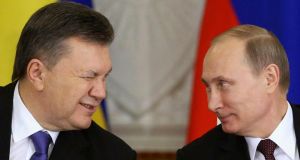 Ukrainian president Viktor Yanukovich with his Russian counterpart Vladimir Putin during a signing ceremony after a meeting of the Russian-Ukrainian Interstate Commission at the Kremlin in Moscow. Photograph: Sergei Karpukhin/Reuters

Russia will lend $15 billion (€10.9 billion) to Ukraine and slash the price it pays for gas, as Moscow seeks to reinforce relations with the cash-strapped country and stop it taking a decisive turn to the West.

Pro-EU protesters on Kiev’s Independence Square demanded to know what President Viktor Yanukovich had promised Russia in return, with opposition leaders suggesting he had made a secret deal with Kremlin leader Vladimir Putin, who wants Ukraine to join a customs union of ex-Soviet states.

“I know only one place where there’s free cheese – a mouse trap,” said opposition leader Arseniy Yatsenyuk. As thousands of protesters chanted “Shame!” and “Down with the gang!” at Mr Yanukovich and his government, another opposition chief, Vitaliy Klitschko said: “He has given up Ukraine’s national interests, given up independence and prospects for a better life for every Ukrainian.”

“The only way out for the country is early elections . . . I am challenging Yanukovich to get into the ring – he is my personal opponent,” said Mr Klitschko, a boxer who this week gave up his world championship belt to focus on running for president in 2015.

Joint projects
In the Kremlin, the two leaders also signed deals on joint industrial projects and to boost trade that slumped in the last two years, as Russia grew annoyed with Ukraine’s negotiation of a historic pact with the EU that would have tilted it to the West.

Following months of trade sanctions from Russia, and faced with the threat of tougher retaliation if he signed the association agreement, Mr Yanukovich pulled out of the EU deal a week before he was due to sign, enraging many Ukrainians and triggering protests.

Demonstrators accuse Mr Yanukovich of rejecting the EU pact in favour of quick cash from Russia, which comes without any obligation to enact tough reforms or reduce rampant corruption, and could help him spend his way to re-election in 2015.

Mr Putin insisted that Moscow’s planned purchase of $15 billion of Ukrainian bonds and roughly one-third reduction on what Kiev pays for Russian gas were “not linked to any conditions”, and that he and Mr Yanukovich did not discuss Ukraine’s possible membership of the customs union.

Mr Putin did say the trade agreements could “increase by several times the sale of Ukrainian products in Russia and other customs union states. This would considerably increase work for Ukraine’s industrial enterprises and provide extra jobs.”

Mutual meddling
Russia and western capitals have accused each other of meddling in Ukraine’s affairs, and a White House spokesman said that “agreements concluded between Kiev and Moscow will not address the concerns of those who have gathered in public protest across Ukraine.”

Ukraine’s opposition yesterday accused the authorities of endangering Mr Klitschko’s life last month when, moments before landing, his plane was denied permission at a Kiev airport. Officials allegedly claimed that “anti-terrorist measures” were under way, even though other planes were being allowed to land.

On a freezing Maidan last night, protesters were confident they would prevail.

“Yanukovich and his gang are a disgrace to Ukraine. They have to go,” said Sergei Laukort (50) a farmer from near Kiev. “No one here will surrender,” he smiled, looking over the flag-waving crowd.

“The EU is not the main issue here. This is about the country’s future, our children and grandchildren. We will fight if necessary. If they want a war they will get one.”