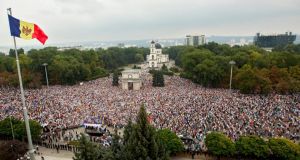 Protesters gather at the main square in Chisinau yesterday: about 15,000 people were believed to have joined the demonstration demanding the dismissal of several public servants, the president, speaker and prime minister and the return of stolen money from banks. Photograph: Dumitru Doru/EPA

Several protesters have been detained after tens of thousands in Moldova took to the streets of the capital to demand the dissolution of the new government following corruption scandals.

Demonstrators assembled on Great National Assembly Square in Chisinau yesterday to call for the resignation of the president, Nicolae Timofti, early elections and punishment for those responsible for widespread embezzlement.

The protest is the largest such action in the former Soviet republic, which has been one of the poorest countries in Europe since its independence movement in the early 1990s.

Clashes broke out with police at the prosecutor general’s headquarters, where activists tried to set up an occupy-style tent encampment. Opposition leaders have accused the prosecutor general of being an instrument of political persecution. Police detained activists, several were injured and one woman was hospitalised, news agency Interfax reported.

Some Russian and Ukrainian media outlets called the protests a “Maidan”, referring to the colloquial name of the months-long demonstrations in Kiev that ousted president Viktor Yanukovych in 2014 and led a standoff between Russia and the west. Like Ukraine, Moldova has ties to both the EU and Russia, where many of its citizens work, but has moved toward European integration in recent years.

Moldova’s parliament narrowly elected Valeriu Strelet as prime minister in July amid increasing political turbulence. Thousands protested in May after $1 billion – one eighth of the country’s budget – disappeared from three banks through mysterious loans.

The IMF and World Bank stopped lending to Moldova after the incident, and the return of the money remains a key demand of the current protests.

Mr Strelet’s government has pledged to move the country toward EU membership and hold those responsible for the bank theft to account, but the opposition movement has accused it of not undertaking reforms in good faith. It also blames powerful oligarchs for wielding inordinate influence over the economy and politics.

Mr Strelet was forced to meet a contact group from the protesters, inviting them to further negotiations and promising to pass along their request to meet with the president.

Other demands by protesters were judicial reform, greater media freedom, the dismissal of the heads of numerous government agencies, and the cancellation recent electricity and gas rate hikes. Footage showed demonstrators chanting “Resign!”, “We are the people!” and “Down with the mafia!”. – (Guardian service)