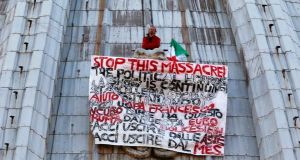 Italian businessman Marcello Di Finizio displays a banner to protest against austerity measures, on the dome of St Peter’s Basilica at the Vatican. Photograph: Alessandro Bianchi


Lest anyone had any doubts, two reports in the last two days indicate the devastating impact of recession and austerity in Italy. In its annual report yesterday, national statistics agency ISTAT offers up a scenario of relentlessly negative economic statistics that suggests Italy is headed for some very troubled times.

The agency claims not only that 15 million Italians are feeling the pinch but also that 8.6 million of them are in such “serious economic difficulty” that they have had to stop basic expenditure such as buying meat or heating their homes.

More than 50 per cent of Italians claim they were unable to afford even one week of holidays away from home last year. In such a climate, the results of another economic report, released on Tuesday by Coldiretti, the Italian national farmers’ group, hardly come as a surprise.

It found one 40-year-old in four relies on a subsidy from his/her parents. That figure rises dramatically when the 18-24 age group is assessed, with 89 per cent of them relying on their parents. There is no “dole” in Italy, only a short-term compensation for laid-off industrial workers.