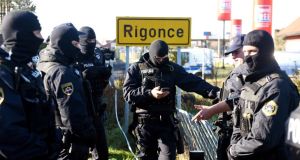 National leaders along the “Balkan route” are under pressure to address the growing fears of their people, which in several cases are fanned by nationalist parties on the rise. Photograph: AFP/Getty Images

The river Sutla curls quietly through a normally tranquil corner of Europe, its grassy banks frequented only by fishermen, and ducks whose stray feathers now drift downstream with the autumn leaves.

For most of its length, the Sutla marks the border between Croatia and Slovenia, neighbours and EU members that generally get on well, and did not clash during Yugoslavia’s bloody collapse in the 1990s.

But now the unassuming Sutla and two of the sleepy villages it separates find their peace disturbed by an international crisis which, some top officials warn, could spark the worst turmoil in more than 20 years across the still-troubled Balkans. As states despair of the EU’s failure to find a remedy to the refugee crisis, they are taking matters into their own hands and beefing up their border defences despite the objections of their neighbours.

As Austria announced plans on Friday to fence off part of its border with Slovenia, on a bridge over the Sutla people eyed the glinting hoops of razor wire that now stretch away along the riverbank before vanishing from view in a distant copse.

Sensing his listeners’ bewilderment, Petar shrugged: “It’s crazy, I know, but that’s how things are sometimes in old Yugoslavia.”

The two states have long argued over the border at this spot on the Sutla, where the Croatian village of Harmica sits facing similarly-sized Rigonce in Slovenia.

The dispute has irritated rather than threatened bilateral relations, but tempers flared this week when Slovenian troops unfurled the wire, prompting Croatia’s special forces to arrive on the scene and its politicians to demand immediate removal of the fence.

Croatia quickly withdrew its security forces but maintained the accusation that Slovenia was encroaching on its territory. “We are just going to warn them that they have entered Croatian territory and tell them to remove the fence,” said Croatia’s interior minister, Ranko Ostojic. “If they do not, we will send them a diplomatic protest, and then physically remove the fence.”

It is hard to imagine Croatia sending soldiers over the little Sutla bridge to dismantle the razor wire, just as it is unfathomable that Slovenia would use force to stop them – even though armed police and troops are just 1km down the road guarding a Slovenian transit camp for refugees.

In the absence of an effective EU response to the crisis, however, national leaders along the “Balkan route” are under pressure to address the growing fears of their people, which in several cases are fanned by nationalist parties on the rise.

Leaders who refuse to take a hard-line stance risk being portrayed as weak and ineffectual. In Croatia, the ruling Social Democrats lost a parliamentary election this month to right-wingers who vowed to take tougher action against migrants.

If the HDZ party succeeds in forming a ruling coalition in Croatia, then parties with strong nationalist-populist streaks will be running Turkey, Greece, Macedonia, Serbia, Croatia and Hungary – all along the Balkan route almost as far as Austria, where the far-right is also resurgent.

Farther north, the governments of the Czech Republic, Slovakia and Poland are also strongly against immigration. These parties’ supporters expect tough action on migration and their leaders cannot risk being seen as weaker than counterparts in neighbouring states, creating a regional atmosphere conducive to the escalation of disputes.

“If the migrant crisis is not adequately controlled . . . there is a possibility of conflict situations between the states of the western Balkans,” Slovenia’s Miro Cerar, probably the most mild-mannered prime minister in the region, said this month.

“It is possible that a small conflict would initiate a wider reaction because of the very difficult recent history [of the region], which is why it is very important that we solve this crisis together.”

There is no threat of armed conflict in the Balkans now, but things can change quickly in the region – last month, after all, Cerar insisted he did not want to build a fence.

“I don’t want to be a doom-monger,” German chancellor Angela Merkel said about why EU leaders held talks with their Balkan counterparts late last month.

“But it happens faster than you think – from arguments come scuffles, and from scuffles come things that none of us want.”