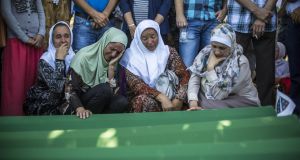 Mourn over the coffin before the mass funeral for 136 newly-identified victims of the 1995 Srebrenica massacre attended by tens of thousands of mourners in July. Photograph:Matej Divizna/Getty Images 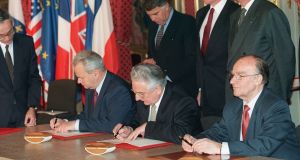 History’s many cruel ironies show no mercy. Today marks the 20th anniversary of the signing of the Dayton agreement in Paris.

The peace treaty marked the end of the three-year war in Bosnia, which began on April 6th, 1992 and claimed 100,000 lives, including the genocide of 8,373 Muslim men and boys at Srebrenica, as well as a vicious rape campaign during which many of the estimated 30,000-50,000 violated women died.

The formal document signed on this day was less about establishing long-term peace in Bosnia and more about ending the fighting in what was only one specific war within a series of conflicts following the break up Yugoslavia. This began with a 10-day war in June-July 1991 and ended in the securing of Slovenian independence.

Meanwhile, in neighbouring Croatia, old tensions between the native Serbian minority and the Croatian majority had been intensifying since the late 1980s. This unrest exploded soon after the war in Slovenia and ignited the four-year-long Croatian war of independence.

The Yugoslav national army, no longer multiethnic and by then consisting almost completely of Serbian soldiers, attacked Croatia on its eastern border and on its southern flank at the magnificent city of Dubrovnik.

This complacency was not to last. In the aftermath of the respective Slovenian and Croatian declarations of independence, the Bosnian government of the day passed its own referendum for Bosnia and Herzegovina independence on February 29th, 1992.

This leap year referendum had, however, been boycotted by the Bosnian Serbs, who then mobilised their own forces in order to establish an “ethnically pure” territory free of Muslim/Bosniaks and Croats. It was to be the beginning of almost four years of extremely bitter ethnic fighting, while elsewhere in Europe nations celebrated the 50th anniversary of the end of the second World War.

By the time the peace agreement was reached, on November 21st, 1995 after three weeks of negotiation at a US military air base in Dayton, Ohio, more than 100,000 Bosnians, mostly Muslim/Bosniak, had been killed and more than two million people were displaced from their homes. This included 100,000 Bosnian refugees who had fled to a peaceful Slovenia.

Susan Curtis, a British publisher, spent three years working in refugee camps in Ljubljana. “I was a member of an international voluntary organisation at the time and was sent to Slovenia to work with Bosnian refugees of all ages,” she says.

“We organised English language classes and outings for children and while we spent a lot of time teaching and entertaining them, they would have managed well anyhow, the young always do. It was the adults and the elderly who grieved most for their lost country.”

A strange atmosphere of apathy and restlessness dominates at a refugee camp. “They are transient places, everything about them is temporary . . . the people there have no desire to be there and no desire to stay . . . for them it is a kind of limbo between the life they had before, in their home country, and the afterlife that awaits them at some specified time and place. They live in a kind of half-world of dream and memory.”

How about anger? “Yes, there was anger, but less than we might think.” Was there an awareness of religion? “In fact it was less a war of religion, than of ideologies and a struggle for power.”

In So Like Fire (1997), a book she wrote about her experiences working with Bosnian refugees, she says: “When we first arrived at the centres [former military barracks and workers’ hostels] everything was new and strange and a little bit frightening.

“We listened to the stories of those who had lost their jobs, their homes and finally their country. It was a bit difficult to imagine how they felt; one felt so powerless when they told you of their loss and you could think of nothing to say in return.”

“It was known that Srebrenica was under threat, the refugee centre was full of women whose husbands stayed behind; they were in the Bosnian army. This is part of what I have been saying: it was not just about religion, they were defending their homeland against the Serbian nationalists.”

What was it like when the news broke? “It was eerily quiet, apart from the radio report. The Serbs had entered the town and the United Nations force, a Dutch battalion, offered no resistance. And in the centre, you could hear women crying, wailing.”

In 1927 the great Austrian chronicler Joseph Roth stood in Sarajevo and, aware that it was the place where the Great War had begun, felt it should be a monument to suffering.

Conflict by tradition inspires writers. Curtis had always been interested in literature and by learning the language became aware of the quality of the fiction and realised there were stories from the Balkans which had not been told in English.

She launched Istros Books in 2011. The novelists of the region have been drawing on their experiences to write superb and convincing fiction, such as Bosnian Alma Lazarevska’s Death in the Museum of Modern Art, translated by Celia Hawksworth, a series of tender stories set in the besieged city of Sarvajevo.

Croatian Slavenka Drakulic’s harrowing As If I am Not There: A Novel about the Balkans, translated by Marko Ivic (Abacus, 1999), which describes a young woman’s ordeal in a rape camp, was adapted in 2010 by Irish filmmaker Juanita Wilson.

The most recent war ended, yet the peace remains uneasy: so much history, so much blood and, as Roth warned, so many ghosts.