French president has promised citizens their sovereignty, but can he do it alone? 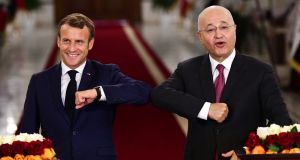 French president Emmanuel Macron and Iraqi president Barham Salih greet each other with elbow bumps after a press conference at the presidential palace in Baghdad on Wednesday. Photograph: Murtaja Lateef/EPA

Emmanuel Macron returned to Paris on Wednesday night after a three-day journey to Beirut and Baghdad during which he played the role of a modern-day Lawrence of Arabia, promising sovereignty to the long-suffering citizens of Lebanon and Iraq.

“This battle for the sovereignty of Iraq is essential,” the French president said, “to ensure that these people who have suffered so much not be subjected to domination by regional powers and Islamist terrorism.”

Iraq has been torn between the US and Iran since Saddam Hussein was deposed by a US-led coalition in 2003. US president Donald Trump restated on August 21st that he would withdraw about 5,000 US troops from Iraq. Macron sees an opportunity for France to step into the void left by US disengagement.

Both countries are decomposing, imploding. Neither have developed a civilised, inclusive sense of national belonging

Macron on Wednesday became the first foreign leader to meet the new Iraqi prime minister, Mustafa al-Kadhimi, a Shia Muslim former head of Iraqi intelligence who was appointed in May. He also met Iraq’s Kurdish president, Barham Salih, the Sunni speaker of the assembly, Mohammed al-Halbousi, and Nechirvan Barzani, president of the autonomous Kurdish region.

Macron is in conflict with Turkish president Recep Tayyip Erdogan regarding Libya, Syria, energy resources in the eastern Mediterranean and now Iraq. “Thousands of Turkish soldiers and special forces have gone into northern Iraq to fight the [Kurdish] PKK, which Turkey considers a terrorist group,” said Bakawan. “When Macron evokes Iraqi sovereignty, he is criticising the Turkish offensive.”

There are similarities between the two countries Macron has taken under his wing. Both saw violent street protests repressed by Iranian-backed militias last autumn. Both economies are in ruins. And both have confessional systems of government in which positions are attributed according to religious origins.

“Both countries are decomposing, imploding,” said Bakawan. “Neither have developed a civilised, inclusive sense of national belonging.”

The title of Bakawan’s book, The Impossible Iraqi State, betrays his pessimism. “Personally, I think that objective conditions in Beirut and Baghdad prevent the functioning of a normal, sovereign state,” he said. “Confessionalism is not the only pathology. You also have tribalism, terrorism, regionalism and systemic corruption.”

Macron has set a timetable for Lebanon. “There is one thing we can build step by step,” he said in Beirut on Tuesday night. “Confidence.”

It’s surprising he hasn’t involved the EU yet, because he is seen as an EU leader

Macron’s return to Beirut focused the minds of fractious Lebanese politicians enough for them to agree on the appointment of a new prime minister, Lebanon’s former ambassador to Berlin Mustapha Adib.

“He is lucid,” Macron said of Adib. “He has walked the streets and he knows he is not seen as a saviour, because he is the fruit of a system which does not have the confidence of the people.”

Macron’s Lebanese interlocutors promised to form a “government with a mission” within 15 days. In recent years, he noted, it has taken up to 11 months.

It was not up to him “to anoint or to approve cosmetic changes” in the Lebanese government, Macron said. He explained his willingness to talk to the Iranian-backed Hizbullah, saying, “If I wanted to be a purist, I would say Hizbullah must be condemned, they must be disarmed, and I would go home and you would still have your problem and I would have changed nothing.”

The French president summoned Lebanon’s leaders to yet another donors’ conference in Paris in the second half of October. The €9.2 billion pledged at the April 2018 Cedar Conference has not yet been disbursed because Lebanon has failed to pass an anti-corruption law or complete an audit of the central bank.

Macron promised to return to Beirut for the third time in five months in December.

Though Macron referred often to the United Nations, he seems to have forgotten the European Union. “France alone has no chance of succeeding,” says Bakawan. “With EU and UN assistance, France can play a very positive role. It’s surprising he hasn’t involved the EU yet, because he is seen as an EU leader.”

The support of the EU “must be obtained now”, said Le Monde’s editorial, “to limit the dangers of a solitary adventure.”