Münster attacker’s father says son was ‘tormented in his head’ 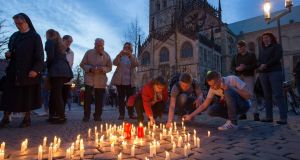 People light candles at the scene where two people died when a vehicle ploughed into a busy cafe and restaurant in Münster, Germany. Photograph: Friso Gentsch/AFP/Getty Images

The father of the man behind Saturday’s van attack in Münster said his 48-year-old son had long-term mental mental problems and was “tormented in his head”.

Jens Rüther crashed his silver VW camper van into a bar terrace and shot himself dead. Two people were killed and 20 injured in the attack in the western German city, with three still in a critical condition.

Police said on Monday that the 48-year-old designer was known to them and a regular at psychiatric clinics in the western German city. He had no accomplices, said police, after searching the man’s Münster apartment, nor did he have any links to Germany’s extreme right scene.

“We found no clues of danger to a third party or that he was planning to drive a van into a crowd,” said a police spokesman in Münster.

In an 18-page document, sent to friends and family before the attack, Rüther wrote he had been mistreated by his parents and, as a result, suffered regular angry outbursts, lifelong impotence, periods of alcoholism, panic attacks and weeping spells.

An operation on his back in 2015 left him in chronic pain and incontinent, he wrote. In later years he was increasingly paranoid, had at least four court appearances for hit-and-run, fraud and threatening behaviour, and told therapists he was planning a “spectacular suicide”.

The man’s father has denied ill-treatment of his son and said he and his wife are “destroyed” by the attack.

“My son had a serious mental illness, a kind of schizophrenia . . . he must have been tormented in his head,” said Franz Rüther to Spiegel Online. “He suffered delusions and paranoia, he imagined things that weren’t true and made no sense.”

He also dismissed claims that he and his wife had tormented their son as a child.

“The opposite is the case,” he said, saying their son had an idyllic childhood in Madfeld, 150km southeast of Münster.

Police are investigating how the man came to possess the weapon he used to shoot himself, as he held neither a gun licence nor is there any record of him buying a gun.

“He had no Islamist background and to date we have no indications of any political motivation,” said Herbert Reul, interior minister of North Rhine-Westphalia. “Münster is in mourning and is still in shock.”

Meanwhile, Berlin police have released without charge six men, aged between 19 and 21, detained on Sunday on suspicion of planning an attack on Berlin’s half-marathon.

Two of the six had links to Anis Amri, the Tunisian man behind Berlin’s 2016 Christmas market attack, and also attended an extremist mosque in Berlin popular with Salafist extremists.

A Berlin police spokesman said there were no concrete clues of an attack but that the arrests had a “preventative character”.

The men were detained, their apartments searched and phones confiscated after investigators observing them saw them appearing to inspect the route of the race with 36,000 participants.