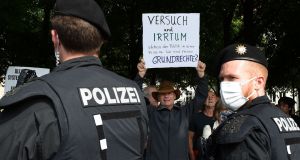 Police at an unauthorised protest near the official demonstration against the restrictions implemented to limit the spread of Covid-19, in Munich, last Saturday. Photograph: Christof Stache/AFP via Getty Images

Even as Germany eases its Covid-19 restrictions, police are braced this weekend for the biggest wave yet of protests led by pandemic populists, left-wing anarchists, neo-Nazis and a celebrity vegan cook.

Germany became a leader in combatting coronavirus through early testing and rapid contact-tracing, but pandemic fatigue has been a boon for German Covid-19 conspiracy theorists.

Now chancellor Angela Merkel and her federal government are watching the protests closely, fearing a “pandemic Pegida” – a nod to the xenophobic, anti-Islam group that emerged during the 2015 refugee crisis.

With Germany facing into a severe economic slump, the far-right Alternative für Deutschland (AfD) hopes to channel that protest and boost its political fortunes after it slipped into single-digit support in recent weeks.

From Stuttgart and Munich to Berlin and Hamburg, each lockdown Saturday has seen growing numbers of people defying the ban on public assemblies and ignoring social distancing guidelines to demand the reinstatement of their rights.

As the weeks passed, far-left anarchist groups and far-right neo-Nazis have jumped on the bandwagon, jostling with anti-vaccination groups and Jewish World Conspiracy experts in the hope of scooping up new supporters.

One of Germany’s highest Catholic clerics, Cardinal Gerhard Müller, based in the Vatican, has left believers flummoxed by signing a letter saying the Covid-19 restrictions “disproportionately and unjustifiably” undermine basic rights.

Last weekend marches in several cities escalated, as far more people showed up than were registered by event organisers – or permitted to assemble under looser lockdown rules.

Some 1,500 people showed up last weekend in Hamburg, instead of the registered 50, and the demonstration ended with scuffles, two injuries and police use of pepper spray.

Leading the protests are prominent conspiracy theorists such as Ken Jebsen, a former broadcast journalist fired from Berlin outlet RBB over Holocaust denial.

On his YouTube channel, which has 480,000 subscribers, he has led the campaign against Bill Gates and his wife Melinda. Their foundation is a world leader in vaccination programmes, a major contributor to the World Health Organisation and is helping to fund the search for a vaccine against Covid-19.

In a video titled Gates Hijacks Germany, with 2.5 million views, Jebsen claims the Microsoft founder and his wife will impose a mass-immunisation programme on the world and now have “more power than Roosevelt, Churchill, Hitler and Stalin together, in their day”.

In a similar vein, Attila Hildmann, a successful vegan chef and cookbook author and the face of Berlin protests, claims that “Gates wants to set up a global health dictatorship above national governments”.

Other theories circulating in Germany claim that Gates helped created the virus or wants to implant surveillance computer chips under people’s skin.

At protests in Berlin last weekend, some demonstrators carried signs reading “unvaccinated” and even yellow Stars of David. They liken public hostility to them, and their refusal to be vaccinated against Covid-19, to the social exclusion of Jews in the Nazi era.

Researchers attribute the rise of conspiracy theorists to anxiety over the future, and the economic costs to families and business.

But Germany’s domestic intelligence agency, the Bundesamt für Verfassungsschutz (BfV), says it has noted efforts by Russian broadcaster RT and others to stir up discontent over the Covid-19 measures.

“We are seeing a trend that extremists, especially right-wing extremists, are exploiting the demonstrations,” said Thomas Haldenwang, BfV president.

Herbert Reul, interior minister in the western state of North Rhine-Westphalia, has warned “there are a lot of wolves in sheep’s clothing trying to sneak into the middle of society with their anti-democratic slogans”.