Liberté, egalité or stay away? French voters prepare to abstain

Far-right candidate Marine Le Pen and centrist Emmanuel Macron clashed over their vision of France's future, the euro and ways of fighting terrorism in an ill-tempered televised debate on French TV. Video: Reuters 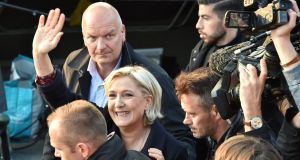 With a black bandana covering his mouth and his eyes obscured by dark glasses, 26-year-old activist Rudolph describes Sunday’s French presidential election as a choice between “two devils . . . fascism and finance”.

He says he “despises” Marine Le Pen and the far-right National Front, but admits he will not seek to block her bid for the Élysée Palace by backing her opponent, the centrist former banker Emmanuel Macron. “The only way is to take the fight to the streets,” he says.

Rudolph and many of those like him who took part in the annual May Day protests earlier this week are from the extreme left. But on this point his views chime with millions of other French voters from across the political spectrum, who polls suggest would rather abstain or spoil their ballots than vote for either candidate on Sunday.

Analysts believe turnout is key to an election that has already defied expectations. While Macron is as much as 20 percentage points ahead, according to polls, a high abstention rate could eat away at his majority or even – if it was extreme enough – turn the tide and hand victory to Le Pen. Abstentionism typically helps the FN because their diehard supporters are more likely to vote.

Halfway across France in the Lyon suburbs, which voted overwhelmingly for the centre-right candidate François Fillon in the first round, residents expressed a similar sentiment to far-left Rudolph.

Olivier Cohendy, whose family run a bistro in the wealthy Écully neighbourhood, says he will not vote for either candidate and instead plans to spoil his ballot. “Le Pen is worrying, she wants to leave Europe . . . [But] Macron is a big liar,” he says.

Sebastien Charbonnier, a barman at the establishment who says he too will not support either candidate, adds: “Macron is the son of François Hollande” and “Hollande has brought this country to catastrophe.”

Underscoring the pessimism, as Macron and Le Pen were engaged in a bitter televised debate on Wednesday evening, the hashtag #SansMoiLe7Mai (Without me on May 7) was among the topics trending on Twitter.

The antagonism to both candidates is in stark contrast to 2002, the last time the FN made it to the second round of a presidential election. Then a “united front” of voters came out in droves to support centre-right Jacques Chirac against Jean-Marie Le Pen, father of Marine. Leftwingers memorably wore cloth pegs on their nose as they cast their ballots, helping Chirac to the biggest victory in French electoral history with 82 per cent of the vote.

Fifteen years later, however, attitudes are different. On the right, a recent Ifop poll showed nearly a quarter of those who supported Fillon in the first round said they would abstain on Sunday. Almost a third said they would vote for Le Pen.

For the left, the same polls suggest that close to 40 per cent of those who voted for communist-backed Jean-Luc Mélenchon in the first round plan to abstain. A further 11 per cent are preparing to back Le Pen. Mélenchon, who took 7m votes in the first round, has refused to support Macron, framing the election as a dismal choice between the “extreme right” of Le Pen and the “extreme finance” of Macron.

For Le Pen to prevail, analysts say the turnout would have to be closer to 50 per cent rather than the 75 per cent predicted.

But even if Macron wins, it will have as much to do with the fact that voters are unwilling to support Le Pen and the FN’s toxic brand than an endorsement of the former banker’s open vision of the world.

In last month’s first round, 49 per cent of voters supported a candidate who was anti-EU and in favour of protectionist trade barriers. Should he top the polls on Sunday, Macron would as president have to confront bubbling anger across the country from decades of slow growth, high unemployment and grinding de-industrialisation.

“Le Pen may not win,” says Sylvain Crépon, professor at Paris Ouest Nanterre University. “But after this campaign, it is clear how divided the country is.”

In Écully, Martine Batt, a retired teacher, says she is fed up with globalisation and is planning to vote for Le Pen, whom she believes has made the FN a mainstream party. “Le Pen is less extreme right and . . . more nationalist,” she says. “I’m for Europe but not for the Europe of globalisation.”

At the Paris May Day protests, groups of trade unionists and leftwingers skirmish with police, as a nearby banner alludes to the two candidates: “Plague or cholera: we don’t want either.”

Standing under a sign that reads “To the streets, not the polling stations”, Ludovic Navarro, an unemployed 42-year-old, believes it is more important to send a message of protest to the political classes.