Liberals back Pedro Sánchez to be Spanish leader 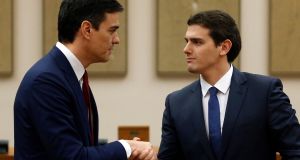 Spain’s Socialists have signed an agreement with the liberal Ciudadanos party which they hope will lay the foundations for a “progressive, reformist” government, providing they can gain the necessary support in a parliamentary confidence vote next week.

Spain has been in political limbo since inconclusive elections in December, which the governing Popular Party (PP) won despite losing its majority.

With the most fragmented Congress of Deputies of the modern era due to the emergence of Ciudadanos and the anti-austerity Podemos party, a coalition or governing pact will be needed to form a new government.

On Wednesday Yesterday, Socialist leader Pedro Sánchez took a step toward becoming prime minister as he and Albert Rivera of Ciudadanos signed off on a broad array of planned reforms, ranging from economic measures to tackling corruption and changing electoral laws.

“This is an open, progressive, reformist pact that excludes no one, that causes confrontation with no one,” Mr Sánchez said.

He added: “The mandate we received in the elections was this: ‘Agree amongst yourselves and govern according to what you have in common.’ ”

The venue for the signing appeared to be carefully chosen: the Constitutional Room in Congress, where portraits of the architects of the 1978 constitution hang.

Mr Rivera harked back to the cross-party consensus that led to that accord in the wake of four decades of dictatorship, saying that the current generation of politicians needs “to lay the groundwork for another 40 years of justice, prosperity and union”.

However, this deal alone is not enough for Mr Sánchez to form a government.

On March 2nd he is scheduled to face a congressional vote, requiring an absolute majority in the 350-seat chamber in order to become prime minister.

The Socialists have 90 seats and Ciudadanos have 40. In order to become prime minister, Mr Sánchez will require the support or abstention of either the PP, with 123 seats, or Podemos, which has 69.

Podemos announced yesterday it was suspending negotiations with the Socialists, on the grounds that the deal with Ciudadanos was expressly “aimed at the PP”.

Mr Rivera’s appeal yesterday to those who respect “the constitutional framework, commitment to the euro zone pact and Europe, budgetary stability and the [national] anti-terrorism pact”, suggested that was indeed the case.

However, the PP leader and acting prime minister, Mariano Rajoy, has repeatedly warned he will not support Mr Sánchez.

Last month, Mr Rajoy rejected King Felipe’s invitation to form a government, on the grounds that he did not have enough support.

If a new administration is not formed by early May, fresh elections will be held in late June.